What’s this we have here?

After all the searching, the one bike that caught my eye was an AJS 16Ms.  It was in original, unrestored condition, seemed to be complete and was apparently a runner.  All looked well until I checked the registration documents a few days later and found that the engine number didn’t seem to tie-up with the paperwork.  Perhaps there was some honest explanation, for example maybe the engine casing had been changed at some point, but I didn’t want to take any risks and so politely declined the purchase. 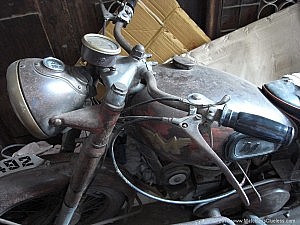 The first sight of the bike

I was just about to leave when the owner said that perhaps I might want to look at the other bike of the same type he had.  I had spotted this bike earlier down one of the passageways, but it hadn’t been for sale previously so I hadn’t taken much notice, except that I quite liked the worn rusty-red / army-green paint work (or rather what was left of the paintwork).  The bike looked quite old with it’s handlebar-mounted Smith’s speedo and so I thought I’d take some photo’s, do some research and have a think.

It certainly looked quite similar to the AJS I had been inspecting previously, but the big “M” on the tank suggested that it probably wasn’t an AJS.  Something to think about anyway…

2 Responses to What’s this we have here?