Home » My motorbikes past and present » My 1949 Matchless G3L 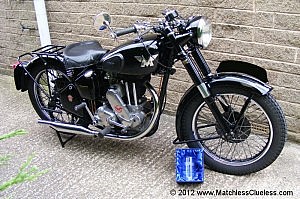 My original 1951 Matchless G3LS motorcycle has recently been joined by a 1949 Matchless G3L rigid model. I had admired this new bike for a while since the previous owner posted some photos on the AJS and Matchless Owners Club website.

As you can see by the photo’s shown on this page, it is a pretty attractive looking machine – nice and black and shiny in all the right places! It has also won prizes in the past too, so I can’t be the only one who thinks it looks good.

Although only two years older (1949) than my other Matchless (1951) it is quite a different machine in many respects. Technically the main difference is that it is a G3L rigid model with no rear suspension whereas my other bike is a G3LS model which has ‘jampot’ rear suspension, so called because of the looks of the damper units. It also has a single saddle-type seat fitted so no pillion, whereas my G3LS has a long bench-type seat for two-up riding. So I’m looking forward to seeing how the two bikes compare in terms of comfort and handling with these subtle differences. 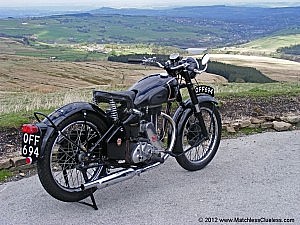 However the main difference is really the looks of the two bikes. This G3L is a nice shiny black and looks pretty much as it would have when it first left the factory more than six decades ago.

This is in stark contrast to the aged and battle-worn look of my first bike which still sports the remnants of its original Indian Army khaki green paintwork.

The bike also has quite an interesting history which the previous owner spent a great deal of effort researching, so I am indebted to him for that. I don’t have the details to hand at the moment, but I’ll try to update this page with more information as soon as I get chance.

The bike isn’t currently on the road though as it is halfway through a full restoration and therefore mostly packaged safely away in boxes back in the UK waiting for me to come back from Hong Kong. The majority of the hard work, painting and replacement of parts has been completed so it’s now just a case of putting it all back together. So that’s something to look forward too! 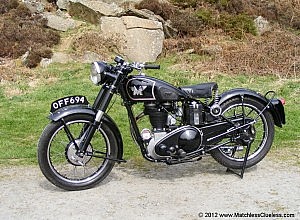 I have added a gallery of photo’s of the bike which you can view here. There aren’t so many pictures of the complete bike at the moment due to it still be mid-restoration and in boxes, but I will be adding more photo updates as the bike slowly comes back together.

Credit to the great photo’s of the bike in the stunning scenery of the Yorkshire moors goes to the previous owner. Thanks Dave!