What type of gearbox is it? 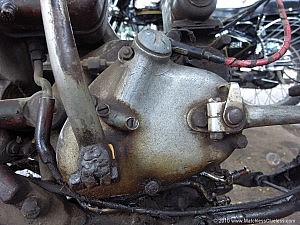 Side view of gearbox

The next part I wanted to have a look at was the gearbox.  From the owners club forum I understood that there should be a gearbox number stamped somewhere on the case, in addition to the engine and frame numbers (the gearbox and engine are separate units on these bikes).  However with the years of accumulated crud and grime I hadn’t yet spotted this so needed to take a closer look.

After a quick wipe with an oily rag, sure enough the numbers were revealed – G3B51 and 169.  Now I’m guessing that the 169 is the serial number of the box, but what does the other code mean?  My thoughts were that the 51 related to the year (1951) which fits with the engine number, and that the G3 is because it is fitted to a G3Ls model bike.  But what was the “B” in the middle?  Further trawling of the forums was required.

Most information that I was able to find related to the Burman “B52” type gearbox, apparently so called because it was introduced in 1952.  But if my bike was made in 1951 then it would pre-date the “B52” gearbox by a year and so must be something else.  Perhaps it’s a “B51” gearbox I thought, but various searches found no mention of such a beast.

Finally someone on the owners club forum kindly provided the answer.  This type of gearbox was indeed made by Burman and is referred to as a “CP” type, although I’m still trying to work out exactly what “CP” stands for, if anything.  Anyway, one more step closer to knowing exactly what it is that I am the proud new owner of!

The keen-eyed amongst you will also have spotted one further small issue with the bike that I hadn’t spotted previously in the above photo.  It seems that the lick-start lever has been welded onto the shaft, presumably because the splines had worn away causing it to slip.  But the mechanic already had a spare shaft in his workshop so thankfully no real problem there, assuming of course that they could get the old one out of the box first!

4 Responses to What type of gearbox is it?