Home » My motorbikes past and present » My 1951 Matchless G3LS 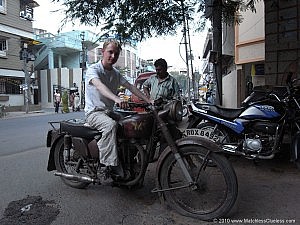 So here’s what it’s all about – my new (but very old!) Matchless model G3LS motorcycle.  What else can I say about it?  Well, it was built in February 1951 (making it almost 60 years old) at the Matchless motorcycle factory in Plumstead, London in the UK.

The bike was part of a consignment of around 400 machines which were sold to the Indian Army, and hence it’s current location here in Hyderabad, Central India.  There are still remnants of the original khaki-green army paint job on some parts of the bike, especially in the more protected out-of-the-way areas such as under the tank and seat.  The current colour scheme however looks more red, due to the combination of the red oxide undercoat and bare steel which have worn through over most of the surfaces.  It gives the bike a very unique look which I very much like.  I’m also told that the exhaust position above the right foot peg is another indication of it’s ex-military history (see bottom photo for close-up) – the exhaust is apparently below the foot peg on civilian models.

The photo above was taken when I was first shown the bike a few months ago – check out the flat tyres, torn seat and grime-encrusted engine!  It’s currently undergoing serving and some restoration, although I want to keep the overall look of the bike unchanged from what you see here.  It would seem such a waste to paint over 60 years of history to “restore” the bike, but nevertheless some parts will need to be repaired or replaced to make the bike roadworthy again. 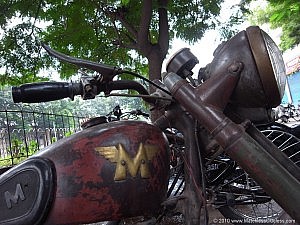 So onto a bit more technical info on the bike for those who are interested.  The engine is a 350cc (well actually 347cc to be exact) single cylinder unit with a stroke of 93mm and an original bore of 69mm.  It looks like it has had a few new pistons in it’s time though as the new piston that has been fitted following the engine overhaul was a +0.060″ oversize!  I wonder how many extra cc’s and bhp that gives me?

The gearbox is separate to the engine on these bikes (connected via a chain drive) and is made by Burman.  Apparently it’s usually referred to as a Burman “CP” type gearbox, as opposed to the “B52” type gearboxes fitted to these models from the following year (1952) onwards.  The gear change is on the right-hand side and it has four gears; from neutral it’s up for 1st  and then down for 2nd, 3rd and 4th.  A bit confusing to start with if you’re more used to modern bikes, but after a few crunchy gear changes when you go to brake, and a few accidental emergency stops when you go to change gear, you get used to it.

Starting the bike is also a bit of a challenge to the uninitiated, there’s no electric starter to begin with.  Then there’s those three extra levers on the handlebars (in addition to the clutch and front brake levers) that you need to get your head around.  Under the clutch lever on the left is a small decompression lever.  This lifts the valves to release compression in the cylinder allowing you to more easily turn it over a few times before starting.  It’s also used for stopping the engine since there is no ignition switch fitted.  The other two levers are on top of the handlebars and are used for adjusting the air mixture (the choke) and the ignition timing.    The owners manual gives a fantasticly poetic description of how these should be adjusted before and after starting, but the general approach in practice seems to be to have them somewhere in the middle and hope for the best! 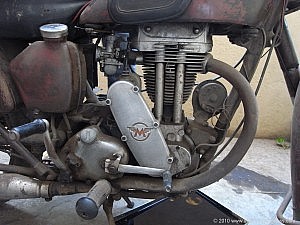 The 350cc single engine of my G3Ls

Other than that, the bike is fairly simple and straightforward with little in the way of electrical gadgetry.  What little electrical items there are (by which I mean horn, headlamp and tail-light) are all 6 volt.  It remains to see what light the headlamp actually manages to throw out on to the road when the restoration is finished, but judging by the comments of other 6 volt bikers, I don’t think night-time riding is going to become my new favourite hobby!  There’s always the option of a 12 volt conversion I guess, but that just seems like cheating.  Perhaps I’ll change my mind though after a few dark winter evenings, but for now, 6 volt it remains.

Other than that, I’m not sure what else I can tell you really.  Check out my main blog page  here for the full story of my restoration of the bike with lots more info and photo’s that you might find interesting.

I have also recently added various galleries of photo’s of the bike from the first time I saw it back in India, through it;s Indian restoration and on to life with it here in Hong Kong. You can find this gallery of photo’s here.

Please also feel free to leave me your thoughts and comments below.