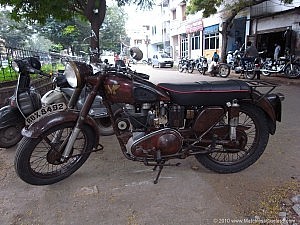 After about two months of trecking across Hyderabad to visit the mechanics workshop in the old city, I have at long last collected my bike today!  It should have actually been ready at the end of last week, but there were still a few small issues to get sorted and so I left it for another couple of days and arranged to collect it today at 2 o’clock.

Needless to say that when I got there just after 2pm it still wasn’t quite ready with a couple of jobs outstanding.  I had wanted to start the hour-long journey back home before around 4pm to avoid the rush hour and riding after dark.  However, the work wasn’t completed until after 5 o’clock and so by the time I’d settled the bill with the mechanic and had some chai, it was gone six and the rush hour was in full swing.

To make matter worse, one of the jobs that remains outstanding is with the dynamo and battery charging circuit. It’s all been rewired, the dynamo serviced and a new battery fitted. The dynamo seems to give a reasonable voltage output, but there isn’t much current getting to the battery, the net result being that the headlamp was only glowing dimly after the first couple of kilometres on the way home (the battery was already pretty empty before I set off). So it was down to side lights, although a lose connection on the front bulb meant that even that was intermittent!  Then I ran out of petrol (the mechanic said it was getting low, whereas he must have meant down to the vapours, but luckily this was only a few hundred metres from a petrol station so not a real problem in the end. 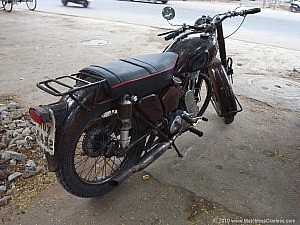 But nevertheless, we made it home in one piece – and I think if we survived rush hour Hyderabad by night, we can survive anything the UK has to throw at us!  The bike felt pretty good too, although quite a different ride to the old Bullet I’ve been plodding around on for the last month or two.

The gearbox is great and very precise, again very different to my Enfield which has more false neutrals then selectable gears.  I kept the rev’s low all the way to run in the new piston and bore, but it certainly seems to have plenty of low-down grunt!

The kick start is rather challenging at the moment though, although I’m assured the engine will free up as it wears in.  For now though I can stand with my full weight on the kick start if the engine is in the wrong piston and it still won’t turn over; no worries about not having any compression.  There is a technique though and I’m picking it up slowly as we bond.  Whether I will be able to start it tomorrow from cold remains to be seen!

So there are a few small jobs still to be completed (mainly the charging circuit), but I’ll happily complete these at home with the help of all the old Lucas service manuals I found this morning on Christian’s Archive – that will give me some pleasant tinkering time for the next couple of weeks.

But most importantly, the bike is at long last rideable (by Indian definition, a motorbike with no lights or horn is perfectly roadworthy!) and so it’s now really all about getting out and about, clocking up some kilometres and running in the engine.  Should be good fun, especially as my wife announced completely out of the blue over the weekend that she actually quite likes riding on the back of the bike.  And there was me thinking that the moped adventure we had down in Goa a month or so back had traumatised her against bikes for life!

7 Responses to Restoration complete at last!