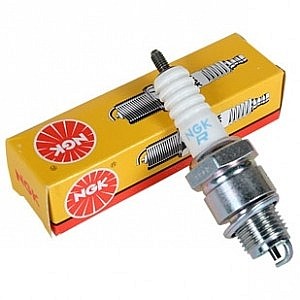 Example of an NGK spark plug

The heat range (or temperature) is one of the most commonly misunderstood things about spark plugs. It is however fairly straightforward once you have forgotten a few common myths and are aware of the contradictory numbering system used by various manufacturers. So let me try and explain…

Engine temperature is governed by factors such as the timing and fuel-air mixture settings, running conditions, lubrication quality, compression and cooling system design to name a few, but certainly NOT by the spark plugs heat range. The spark plug gets its heat from the burning fuel in the combustion chamber, and not the other way round!

This article includes the following sections:

So what does the spark plug temperature rating actually mean then? Well it is all to do with how well the spark plug dissipates heat from its tip (which is obviously in the middle of the combustion process) through to the cylinder head. A ‘hot’ plug has more insulation and so retains more heat at its tip, whereas a ‘cold’ plug has less insulation and so the tip remains at a lower temperature.

When we talk about more or less insulation, in practice what this typically relates to is the length of the insulator nose. This is the white ceramic part of the spark plug which you see if you look at the end that is normally within the engine. It has the firing tip at one end and the other end is recessed up into the metal casing (the thread part) of the plug. 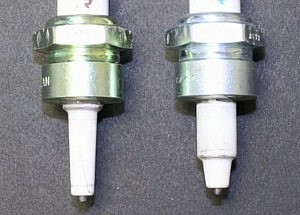 We can see this more clearly if we look at the photo on the left which shows two sparks plug side-by-side which have had the threaded section of the metal casing cut away to reveal the full insulator nose.

The one on the left is what we would call a ‘hot’ plug; the tapered section of the white insulator nose is long so that it will only come into thermal contact with the metal body of the spark plug well up into the main body.

So now we have seen how hot and cold rated plugs look different, what does this actually mean in practice when we come to select the correct spark plug for our engine? Well like everything else, there is an optimum temperature for the firing tip when the engine is in normal operation. This is a bit of a balancing act between two contradictory requirements, namely carbon fouling and overheating

Example of a fouled spark plug

If a spark plug is too cold then residual deposits from the combustion process will tend to build-up on the end of the plug. After a while these may start to bridge the gap between the firing tip and ground electrode reducing the size of the spark and hence impairing engine performance. Eventually the spark gap may be completely shorted so that no spark occurs at all.

Carbon fouling tends to occur at plug tip temperatures below about 450°C and so the optimum plug temperature is generally above 500°C (932°F). At these temperatures, any accumulation of carbon on the tip will be quickly ‘burnt off’ before it can build up.

Example of a overheated plug

On the other hand, if the tip of the spark plug gets too hot it may cause ‘pre-ignition’ whereby the fuel-air mixture is ignited before the correct moment at which the spark occurs. The glowing spark plug then acts more like a glow plug found in a diesel engine, which is obviously not desirable! Overheating of the spark plug may also cause the electrodes to wear away and the ceramic insulator nose to bubble and breakdown.

To prevent pre-ignition and overheating the optimum spark plug tip temperature generally needs to be below about 800°C (1472°F).

So there we have the optimum temperature range for our spark plug – somewhere between around 500 to 800°C (932°F to 1472°F). This is equally true whether you’re dealing with your classic Matchless motorbike, your car or your lawnmower!

Whilst viewing the insulator nose at the end of a spark plug should give you a good idea or whether a plug is hot or cold, this is not 100% reliable as the majority of the insulator is normally hidden by the threaded metal body of the plug and there may also be internal (thus hidden) differences between plugs. Fortunately though the manufacturers part code will normally tell us the exact heat range, although it is important to note that the notation system used varies between manufacturers and may be completely contradictory! You therefore cannot easily directly compare the heat ranges between different brands. of spark plug.

With NGK spark plugs, the number in the middle of the part code designates the heat range so a “B7ES” has a heat range of 7 and a “BP9ES” a heat range of 9. A smaller number means a hotter plug (2 is the hottest) and conversely a higher number means a cooler plug (12 is the coolest). As a general guide, the difference in tip temperature between otherwise identical spark plugs from one heat range to the next is approximately 70 to 100°C. For more information, have a look at this NGK spark plug reference chart.

When dealing with Bosch spark plugs, the heat range is again designated by the number in the middle of the part code; a “W8DC” has a heat range of 8 and a “W6DC” a heat range of 6. However, the Bosch rating system is the opposite of NGK’s in that a low number represents a colder plug (2 is the coolest) and a higher number a hotter plug (13 is the hottest). This system seems more logical to me, but I’m sure NGK have their reasons for their choice! For further details, have a look at this Bosch spark plug reference chart.

With all of these different heat range labelling systems it is difficult to compare spark plugs from different manufacturers. However some manufacturers have provided guides which show which of their plugs are equivalent to those of their competitors, which is a great help! 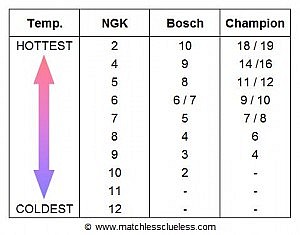 I have reproduced some of this data in the heat range comparison table on the left for NGK, Bosch and Champion spark plugs.

Note though that this table should be used as a guide only as some stated ‘equivalents’ may not be exactly the same between different manufacturers.

However, from the point of view of classic bikes, we are not dealing with particularly high-tech or high-performance engines and so this broad comparison is probably going to be more than close enough!

During development, the manufacturer will go to great lengths to determine the most appropriate spark plug heat range for a new engine. So why would you want to change this you may ask? Well most of the time you probably wouldn’t need to, but there are a few occasions when (for the average classic biker) this might be an advantage.

The first thing to note is that manufacturers will always err on the side of caution when designing any aspect of an average car or motorbike and so longevity and reliability will normally always come before obtaining peak performance. Also, vehicles need to be designed to run in different climates, on varying grades of fuel, with different owners who have different driving/riding styles (for example slow town traffic versus lots of high-speed motorway cruising) and with varying levels of maintenance. So engine manufacturers will normally opt for the ‘safe’ option which will give the best reliability for the majority of users.

But you may not be an average user! Perhaps the most common reason to want to change the spark plug type used in a classic bike is that these are generally used less frequently and for shorter, slow-speed runs around town. Therefore the spark plug may not be getting up to the temperatures required to burn off carbon deposits on the tip resulting in frequent fouling. Whilst not a major issue, having to keep cleaning or changing the plug can be a real hassle. So it may be that selecting a slightly ‘hotter’ spark plug might help to reduce fouling.

Also, if you make any significant adjustments to the running of the engine (e.g. different fuel types, additives, timing or mixture) then these may affect the temperatures in the combustion chamber and hence a spark plug with a different heat range may be more appropriate. The key though is not to make more than one change at a time otherwise you’ll never be sure which of these is impacting of the running or performance of the engine.

Well, that’s about it! Not rocket science at all but nevertheless sometimes confusing, especially with all the contradictory numbering systems used by different manufacturers. I hope this brief guide has helped explain things though!

If, like me, you are the proud owner of a Matchless G3Ls motorbike then you will find further useful information about spark plug selection in my ‘Which spark plug?‘ guide.

And finally, if all of the above still makes no sense to you at all, perhaps this “Here’s how a spark plug works!” article from the November 1945 edition of ‘Popular Science Monthly‘ may help with its illustrations drawn by Walt Disney.