Introduction to replacing a Lucas ammeter 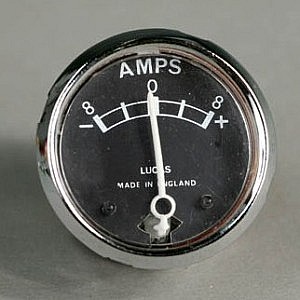 The only real clue to how well the charging system is working on an old Matchless bike (other than the judging by the brightness, or lack therefore, of the headlights at night!) is that little ammeter neatly tucked away in the headlamp cowl. So it’s quite useful to have one that works and gives a reasonably accurate idea of how much charge is flowing into or out of the battery.

Once you’re used to normal behaviour of your motorbike’s charging system, you can actually gauge quite a bit of information (if you’ll forgive the pun) from a quick peer at the dial. In most situations, the ammeter needle should hopefully stay fairly close to the middle. This indicates that the electrical system is balanced with what power is going out (mainly through the lights) is being replenished by the dynamo in order to keep the battery topped up.

A large positive charge into the battery whilst riding along probably means that there is something wrong with the battery. It might just be flat and hence the positive reading on the ammeter shows it’s being charged, but if this persists then the battery might not being taking or holding charge. 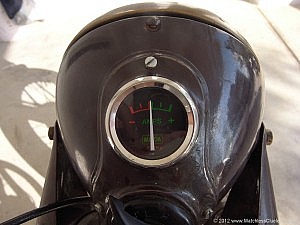 The Minda ammeter to be replaced

When I bought my bike back in India, it had a local ‘Minda’ brand reproduction ammeter fitted. This worked in a fashion, but was not very accurate and prone to jumping around a bit – a problem which didn’t help when trying to diagnose some charging problems I was having at the time!

And so I decided to fit an original Lucas ammeter I bought from back in the UK instead. This guide shows how I went about swapping the old Minda ammeter for a shiny new Lucas type 36084 (+/-8 Amp) unit.

This guide covers the following topics:

Before doing anything else, the first thing to do is to disconnect the battery. The terminals on the back of the ammeter are live and the headlamp shell is earthed, so one false move and you have a short circuit leading to a few sparks at best, or a melted wiring loom at best. You can disconnect the battery by removing one or other of the wires, or else by pulling out the main fuse if you have one fitted (if you don’t have one fitted, do this now before even considering any other electrical work!). 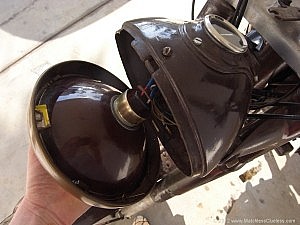 Removing the headlight on my Matchless G3LS

Once the battery is isolated, you then need to remove the glass and reflector from the from of the headlamp unit in order to get inside. Loosen the screw next to the outer retaining rim at the top of the unit (you don’t need to remove it completely) and the glass should lean forward away from the headlamp cowl.

When it’s leaning outwards enough, you should easily be able to unhook the tab which keeps the bottom of the glass in place. Remove the bulb holder (or disconnect the headlamp bulb wires if possible) so that you can completely remove the headlamp glass and reflector unit from the bike and put it somewhere safe. You then have free access to the nuts and wiring on the back of the ammeter mounting panel.

I found it easier to disconnect the wiring on the back of the meter first before pushing it through and out as there is probably not enough slack in the various wires to do otherwise. Make sure you keep the two bundles of wires separate so you put them back on the new ammeter the correct way round.

You can see the Minda ammeter shown in the photos actually has a bulb in the back to illuminate the dial at night. Whilst this is quite useful for seeing the charging / discharging status at night, the Lucas units don’t have such a back-light bulb and so these extra connections also needed to be removed. 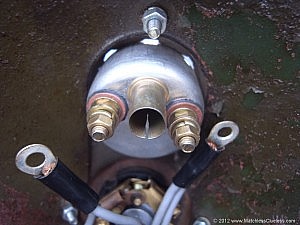 The terminals on the back of the ammeter

With the old ammeter removed, the new unit should just slot straight into the hole in its place. However, when I was replacing the Minda ammeter unit on my Matchless I found that this was slightly bigger diameter than the original Lucas unit (only a millimetre or two) and that the hole in the headlamp panel had been opened out slightly to accommodate it. This meant that the new Lucas ammeter was too lose a fit and so it was necessary to wrap a couple of layers of insulation tape around the meter before installation to ensure a tight fit. The ammeter is only held in place by this tight fit alone and so it’s important to get it nice and tight to prevent it popping out or rotating as you ride along.

Reconnect the various wires to the two terminals on the back of the meter making sure that you get them the right way round and in the right bundles. A quick check that you haven’t missed any wires off and that the terminal nuts are nice and tight (you don’t want them working lose!) then refit the headlamp lens and reconnect the battery.

The first test is to turn on the headlight (no need to start the bike though). Does the headlamp light up? – great! The ammeter should be showing a significant discharge to the left of the dial. The exact reading will depend upon whether your bike is running with 6 or 12 volt electrics and what wattage headlight bulb you have fitted. Divide the wattage of the headlamp bulb (plus an extra 5 Watts or so for the tail lamp) by the voltage of the electrical system on the bike.

On my G3LS I have a 35 Watt headlamp bulb fitted with a 5 Watt tail-light bulb, giving a total of 40 Watts being used up. The bike’s electrics have been converted to 12 volts (see myguide for more info) so the ammeter should show 40/12 = 3.3 Amps. This is just under half of the full-scale reading on a 8 Amp meter. On a 6 volt bike with a 25 Watt bulb (plus 5W tail-light), the current draw should show approximately 30/6 = 5 Amps. Don’t expect the meter to be exact, but it should be there or thereabouts.

If the needle is moving to the right with the lights on, this indicates that you probably have one or more of the wires on the back of the ammeter the wring way round. Current is flowing through the meter backwards, hence it is giving a positive reading when it should be showing a negative one. It’s simple enough to swap them over though.

With the lights all off the meter should return to its zero position, although they do seem to sometimes prefer to settle just either side of the centre. Next start the engine and increase the revs to a fast tickover. The needle should move to the right indicating that charge is going into the battery. How far it goes to the right will depend upon which dynamo your bike has fitted and the state of charge of the battery.

If the battery is fully charged, the ammeter might only read around +0.5 Amps – i.e. the needle is just to the right of centre. However if the battery is flat, it will accept a much bigger current from the dynamo. We can work out the maximum charging current to expect in a similar way that we did for the discharge current due to teh headlights. Lucas dynamos come in either short 48 Watt (e.g. type E3N) or long 60 Watt (e.g. type E3L) varieties, although these figures are really more a guide than a true maximum output power. But that’s fine for our current purposes. 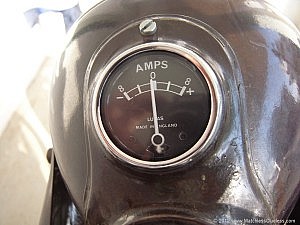 Again you also need to take into account the voltage that your bikes electrics are running at. For my 1951 Matchless with a Lucas E3NL dynamo running at 12 volts, the maximum charging current I would expect would be 48/12 = 4 Amps. If my bike was still running 6 volt electrics this would be doubled to 8 Amps (48/6 = 8). For a bike with a long 60 Watt dynamo running at 6 volts it could be as much as 60/6 = 10 Amps!

The final test is to see what happened when the engine is running and the lights are turned on. With a balanced charging system, the current drain by the bulbs should be about matched by the charging current from the dynamo and so the needle should be approximately in the middle (around 0 Amps) when you’re riding along. Stopped in traffic the meter will probably show a discharge (needle moves to the left) as the dynamo will not be spinning fast enough to generate enough current to balance the load. But at normal cruising speeds the needle should be near zero, or maybe even slightly to the right showing a slight trickle charge going into the battery.

And that’s about all there is to it! If you have replaced the ammeter and the charging system still doesn’t seem to be functioning as it should, then some further diagnostics are in order. The basic checks are fairly straight-forward enough that anyone with a basic understanding of electrics (i.e. able to use a multimeter!) can do them. I’ve written a ‘how to’ article explaining thewhich has lots of photos to guide you through step by step. I hope you find it useful.

Finally, just to draw your attention to theof this website and reiterate that you are entirely responsible for all damage you do to yourself or your bike. But you can also take full credit when you fix a problem yourself too!

If you have any comments, feedback or suggestions about this article I’d love to hear from you. Please feel free to leave me a comment at the bottom of the page.

5 Responses to Replacing a Lucas ammeter