The advantages of LED lighting

Introduction to the advantages of LED lights 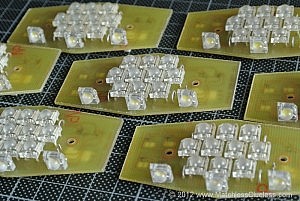 There are many advantages to ‘Light Emitting Diodes’ (LEDs for short) over conventional filament type bulbs. The big improvements made over the last few years in their production and brightness, mean that they are now replacing filament lamps, fluorescent tubes and cold cathodes in countless lighting applications.

They are particularly useful when it comes to classic motorcycles and this article will look at the many reasons why. It contains the following topics (click to jump to a specific section):

The main advantage of LED lights is that they are massively more efficient than a traditional bulb. Filament bulbs get very hot during operation as we all know, and this is all just wasted energy. LEDs on the other hand stay relatively cool and so only minimal energy is lost as heat.

What this means is that for a given power rating, an LED will output a huge amount more light than a conventional bulb. Or to put it another way, an LED only needs to use a fraction of the power to generate the same amount of light for a given application.

As an example, the new Lucas 564 LED light board upgrades I have been developing were designed to be as bright in practice as a standard rear light using a 21/5W filament bulb. The bulb uses approximately 5 Watts of power for the tail light, 21 Watts of power for the brighter stop light and 26 Watts when they are both on together.

By comparison, the 12 volt version of my LED light board only uses approximately 0.72 Watts for the tail light, 0.96 Watts for the brake light and hence 1.68 Watts when they are both on together. To put that in perspective, a single 21W bulb brake light uses the same power as around 22 of my LED brake light units!

Such huge power savings make a big difference on older bikes with dynamo charging systems and relatively small batteries, especially those that are still running at 6 volts.  Fitting an LED light upgrade can help balance the charging system so that the battery is not being continually discharged when the lights are on. This makes life easier for your ageing Lucas dynamo. LED lights are equally useful on alternator equipped bikes, and are a god-send for bikes without a charging system that run at total-loss.

If this was the only advantage of LED lighting then they would still be an ideal solution for classic motorbikes, but actually they have some other important advantages too! 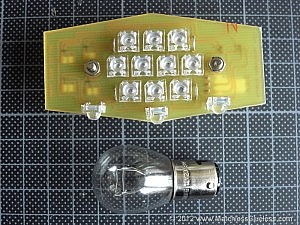 A LED light versus a traditional filament bulb

Filament bulbs are quite delicate – their globes are made from fragile glass and can easily be broken. The glowing filaments inside are also very fragile, made from long coils of fine wire. Bulbs therefore ‘blow’ relatively often when the filament breaks, especially when subjected to the bumps, bangs, knocks and vibration of an old motorbike. It can be rather annoying having to change a bulb at the side of the road, and quite dangerous if you’re caught out without a spare riding at night.

Thankfully LED lights are much more robust as they have no fragile filament inside or delicate glass globe to break. Each LED is encapsulated in it’s own block of plastic, sealed away from the elements and virtually indestructible in normal daily use. They are not generally designed to be quick release like a standard bayonet fit bulb as there should never be any need to replace them. And because LED light units are generally made up of an array of individual LEDs, in the unlikely event that one does fail there are multiple others which will continue to function.

Conventional light bulbs are omnidirectional – that is they emit light roughly equally in all directions. They therefore require a reflector and lens in order to converge and focus the radiating beams, and to direct the light to where it is needed. Anyone who has ever ridden a motorbike with a rusty or tarnished headlamp reflector will know just how much difference this makes to the amount of light which hits the road!

LEDs on the other hand have a focussed beam pattern that varies with the design of the emitter and in-built lens. This can vary from anything from a few degrees (similar to a laser beam) right up to 360 degrees (like a filament bulb), although most LEDs typically have a viewing angle of between around 15 to 45 degrees. The most appropriate type of LED can therefore be selected for a given application based upon the required beam spread so that the light is focussed straight to where it is needed.

For my LED light board I selected a type of super-bright LED which had a wide-angled 90 degree beam pattern. This means that the light emitted is sufficiently spread-out to illuminate the whole of the rear lens unit and numberplate at close proximity, but unlike a filament bulb, they are not unnecessarily illuminating the back and internals of the Lucas lamp unit. 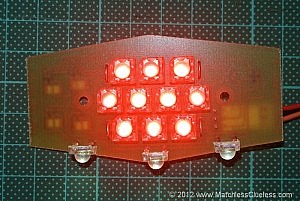 The Red LEDs of my Lucas 564 light boards

LEDs are now available in a huge range of colours. The construction of the emitter at their core determines the wavelengths of light that are emitted and hence the colour of the LED. That’s interesting you say, but the only coloured lights required on a motorbike are the red rear light and the orange indicators, so how does that help us?

Well this again comes back to efficiency. Filament lamps produce white light which is actually a combination of different wavelengths (colours) that together look white. When we install a filament bulb behind a red rear light lens, the lens filters out a large proportion of the ‘white’ light allowing only the ‘red’ wavelengths through. So a lot of the light produced by the bulb doesn’t actually make it out of the light unit at all and is thus wasted, further reducing the efficiency of the bulb. Red and orange coloured bulbs are available, but these still have a filament producing white light which is then filtered by the colour pigment of the outer glass globe.

With LED lights it is possible to select a type which will emit predominantly in the wavelengths (i.e. colours) that you require. Hence red LEDs can be used for tail / brake lights applications, white LEDs for number plate illumination, yellow / orange for indicators, and so on. The coloured LEDs are still producing roughly the same total amount of light as their white counterparts, but this is now focussed within a range of specific wavelengths. So when red light from a red LED passes through the red filter of a rear light unit, most of the light just goes straight through.

I mentioned in the first section of this discussion that I designed my Lucas 564 LED light boards to be the same brightness as a traditional 21/5W bulb. Actually as it turned out they appeared slightly brighter when installed which is for this same reason – a greater proportion of the light produced by the red LEDs is actually finding its way out of the Lucas rear light unit.

So there we go, that’s covered most of the important advantages of LED lighting with respect to classic motorcycles, although I’m sure there are more. If you have any comments or questions I would love to hear from you. Leave me a reply to this article using the form below, or you can get in touch with my directly via email using the contact box at the very bottom of the page.

So now what are you waiting for? You now know why my new LED lights boards are so great, so go and buy one for your classic motorbike in my online store now!

2 Responses to The advantages of LED lighting