The story of my first motorbike - a sporty little Honda NSR 125cc model.
Home » My motorbikes past and present » My 1990 Honda NSR125RK 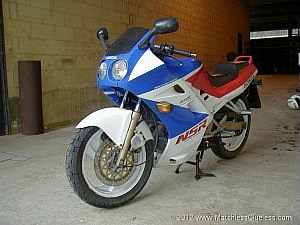 Front view of my Honda NSR125RK

Ok, so I know it’s not a Matchless, but this was my first motorbike back when I was at university and therefore my introduction to the wonderful world of two-wheeled motoring.  Back then, cameras mostly needed film (not memory cards) so I don’t have many photo’s of it, but I did recently find a couple that I took for insurance purposes.

The bike was a Honda NSR125RK and despite looking like something much bigger and sportier, it actually only had a little 125cc 2-stroke engine. It still had about 28bhp though so was pretty quick off the mark and would get up to 70mph easily, or 80 if you lay right down on the tank. Not bad for a 125 hey! The tyres were also nice and wide so it handled pretty well and it stopped fairly sharply too thanks to disc brakes front and rear. From memory I think it was a “H” reg that means it must have been around a 1990 model.

I guess that’s why I liked it at the time as it looked like a proper bike rather than a moped, but could be ridden on L-plates after passing only a CBT. I never did get around to passing my full motorcycle test at the time which didn’t matter though as I didn’t want to go on motorways or carry a pillion. Then I sold the bike after being given a car before the CBT expired, so a full licence wasn’t necessary until I bought my Matchless over 10 years later.

But back to the bike, or at least what I can remember about it. Well I know that it wasn’t exactly reliable for a start. When it went, it went really well but it did seem to be off the road as much as on it. I seem to remember being told that these were Italian import models (although not really sure what that actually means thinking about it now), but being Italian would certainly explain the appalling electrics!

When I purchased it, the previous owner said that the battery needed to be replaced as it wouldn’t hold charge, but even after fitting a new one it would occasionally and randomly run out of juice. And of course having electronic ignition this meant that the engine would die, as well as having no lights etc. After months and months of searching I eventually tracked the problem down to a dodgy connection on the main multi-way connector for the charging circuit. Well actually it was the wire which had corroded through and partially snapped about 1/2″ up from the connector. The insulation on the outside looked fine, but the wire inside was mostly just dust at this point. 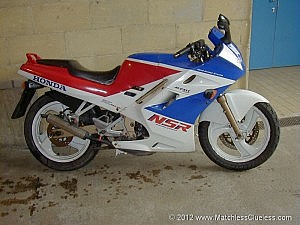 Side view of my Honda NSR125RK

The other big problem I had was that it kept blowing the head gasket, and to this day I still have no idea why. I had new head gaskets fitted by the Honda dealer, and when it blew again I even had the top of the barrel and head skimmed to make sure they were perfectly flat. But sure enough, whatever I did, the head gasket would sooner or later blow again sending a jet of hot steam up the back of my leg. From a quick Google search a couple of minutes ago it seems others have had similar problems caused by blockages in the cooling system, but alas there were no motorbike forums online back then.

So finally, when it was all up and running for the last time I decided it was about time to sell it. I think I actually got back more than I paid for it in the end (not taking into account all the mechanics expenses of course) so I didn’t lose too much on it and it certainly got me back and forth to uni each day much quicker than friends stuck in the morning rush hour in cars. But when I was given an old VW Polo, the joys or dry motoring in any weather, the ability to lug more of my meagre student possessions back and forth from home and the increased life expectancy from not keep falling off meant that two wheels were good, but 4 wheels were better!

And that was the end of my two-wheeled adventures for about 10 years until my 1951 Matchless G3LS came along whilst I was living out in India….