So, now that I knew a little bit more about what exactly it was that I was looking at, it was time for another look over the old bike.  Most importantly was to find the frame number hidden under the seat, and then to check that this (and the engine number found previously) matched the all important log book documents. 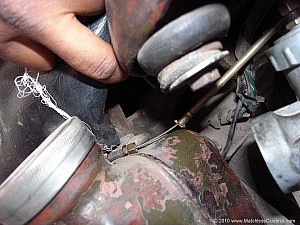 Searching for the frame number

Now as I’ve already mentioned, the actual frame number of these bikes isn’t the easiest to find, even where you know whereabouts you’re supposed to be looking!  It’s stamped onto one of the tubes under the seat, on the right side as you sit on the bike, behind the oil reservoir.  With the seat in place it’s hard to spot, but with the help of a torch and much neck-bending, there it was.  Or at least the last four numbers of it!

The good news was that on later inspection of the various vehicle documents (the Indian equivalent of the UK log book, of sorts), both the engine number and frame number matched.  Phew!  So, the next question was would it run?

Now those of you who are more expert in these matters than me have probably already noticed the deliberate mistake in the above photo.  Yep, that’s right – the carb.  It’s a modern Mikuni-type copy and not the original Amal that should have been fitted.  Actually, when I first saw the bike it didn’t have a carburettor fitted at al, only an old plastic bag sealing the inlet from the worst of the dust and monsoons.  So the mechanic bought along the newer carb so that we could get the bike up and running. 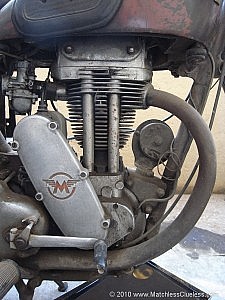 Draining the oil from the sump

The previous owner, a bit of an old bike collector, had bought the bike almost exactly 1 year and 11 months to the day before.  The bike had been ridden to his home, parked up against a wall down a side passageway and not touched since.  However, the mechanic said (jokingly I think) that he would get it started in only three kicks.  I (even more jokingly) said that I needed it to start first kick or I might not be interested.  And so, the bike was wheeled out from the passageway, the oil drained fro the sump and replaced into the oil reservoir, some petrol fed in to the carb and the engine turned over a couple of times with the plug out to free it up.

Then the moment of truth.  Plug back in then lo and behold, first kick it fired up!  Now as you have no doubt gathered already from this blog, I am by no means an expert on classic bikes.  But starting first kick after sitting for nearly two years untouched certainly seemed like a good sign to me.  It also made the mechanic feel quite smug – you should have seen his grin!  🙂