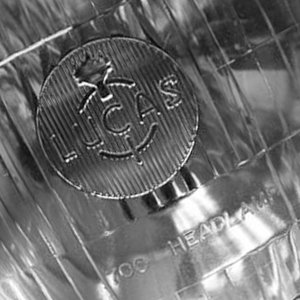 The Lucas logo in a headlamp

Joseph Lucas, ‘Prince of Darkness’, alleged inventor of the world’s first self dimming headlights and intermittent windscreen wipers. Who’s light switches usually have three settings – dim, flicker and off. And who apparently still holds the patent for the ‘short-circuit’. The list of Lucas jokes is endless, but that really doesn’t help with keeping your old bike on the road does it?

In reality, the electrical systems on classic bikes (be they Lucas, Miller or otherwise) are pretty simple and straightforward to maintain and work on. Electronics has always been one of my interests so the dodgy wiring, temperamental Lucas E3NL dynamo and intermittent Lucas MCR2 voltage regulator on my old Matchless was more of a pleasant opportunity for some tinkering than a big headache. However, I realise that all this electric-trickery isn’t everyone’s cup of tea, and so that’s why I’ve put together the following series of articles and guides looking into various aspects of a motorbikes electrical systems.

Most of these articles have been compiled and written with respect to my cherished 1951 Matchless G3LS, but they are equally applicable to many other makes and models of motorbike from around the same era. Most of the principles and techniques described are also equally applicable to cars and other vehicles, as well as to other electrical manufacturers besides Lucas such as Miller. If your bike has an alternator charging system then that’s a very different beast to a dynamo, but you may still find the guides on fuses, wiring, switches and lighting useful. So please scroll down and see what takes your interest.

This is my basic beginners guide to diagnosing potential faults with the Lucas electrical system of your classic motorbike, which covers:

If you suspect that your Lucas dynamo is at fault, this article will guide you through a series of simple checks and tests you can perform, including:

Lucas dynamos can sometimes lose their residual magnetism over time or be incorrectly polarised, so this is a step-by-step guide to repolarising which includes:

Many classic bikes are wired with 6 volt electronics, but converting to a modern 12 volt system has many advantages. This guide includes:

This is a step-by-step guide to replacing the old Lucas mechanical voltage regulator unit with a modern solid-state electronic device. It covers the following topics:

Old ammeters often become inaccurate or fail completely over time, so this guide explains how to replace the gauge with a shiny new one, including:

Most classic bikes never had a fuse fitted as standard, but fitting one is simple and can save you a lot of smoke and fried wiring! This article explains:

Brake lights were still not fitted as standard to many bikes right up until the 1950’s, but they are essential on today’s roads. This article explains:

The headlights on classic bikes may not be as bright as those on modern vehicles, but there are some simple things you can do to help including: