Parts and servicing in India 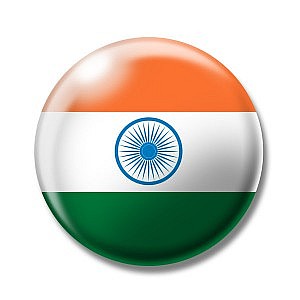 Quite a few people have contacted me now asking where I purchased parts for my old Matchless motorbike when I was living back in India. This is certainly not easy, especially for a foreigner like myself with a limited knowledge of the local language! But there are so many old bike still on the roads of India that it must actually be possible. I can only speak for Hyderabad in Andhra Pradesh as that’s where I lived, so things might be much easier (or more difficult) in other parts of the country.

This page describes my experiences of trying to get an old bike up and running in India. I would love to hear your experiences, plus any recommendations or suggestions – you can leave a comment at the bottom of the page.

In Hyderabad this was an absolute non-starter for me as there were no suppliers of new parts for classic motorcycles that I came across. Even buying some consumable items was a challenge, for example getting straight SAE50 engine oil, runny grease for the gearbox or even the right grade of NGK spark plug (see here for more about getting the right spark plug in India). It seems that the range stocked by most of the shops was limited to the most popular range of current motorcycles such as Honda Heros and of course Royal Enfields, which gave me a possible solution in some cases (see ‘Using Royal Enfield spares’ section below.

This might be a bit different in some of the bigger cities though so as Delhi or Mumbai. I’ve seen a lot of replica parts for various classic motorcycles being advertised for sale on websites such as eBay and many of these seem to be made in India. So there must be a factory somewhere making them, but maybe only really for export as I couldn’t find anyone who knew of the supplier in Hyderabad. It might be worth searching on eBay and contacting one of the sellers to see if you can trace back to the supplier in India. If you do, please let me know what you find out as I never managed to get very far myself!

Just be aware that the quality of these arts seem to vary quite a bit and some people have reported that they are quite poor or aren’t a very good fit. Chrome plating and sometimes paintwork may not be the best, but that’s easy enough to fix.

Buying secondhand parts for a classic motorcycle such as a Matchless in India is also tricky, but there are parts out there. The best bet is probably to start out by finding out who the mechanic specialising in old British motorcycles in your town is. 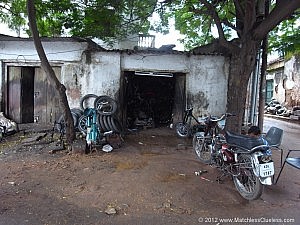 Babar the mechanics shop in Hyderabad 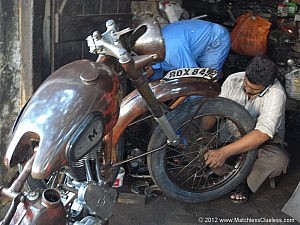 In Hyderabad, this was ‘Babar the mechanic’ who’s shop was somewhere in the Old City, I can’t remember exactly where. There are a couple of photo’s of him and his shop on the right. He’s quite famous so ask around and someone will know who he and where he is.

He managed to source a couple of used components for my Matchless; a replacement kick-start handle when mine fell off along a bumpy road somewhere, and also a rear brake drum. He seemed to have a network of people he knew to call for such parts, but who these were or in what city I have no idea. Things just seemed to magically appear – for the right price of course!

There are also little shops and stalls around that specialise in certain repairs. One of these I found was a specialist in speedometer repairs. It was only a little shack at the side of the road in the Old City, but the owner had a stash of old chronometric speedometer parts that he was almost able to get my old speedo working with. There was just one critical gear that was worn and not possible to replace, but he nearly managed.

Finding these businesses is not the easiest, and again I would advise starting with the classic bike expert mechanic who should be able to point you in the right direction if you ask nicely.

One solution to the problem of Matchless parts not being available is to use some Royal Enfield Bullet parts instead. In fact I’d bet that there’s not a classic bike anywhere in India that doesn’t have at least one Enfield part on it somewhere! Many of the old British bikes used lots of the same parts from common suppliers, such as Lucas electrics. So the old Bullets used the same parts as old Matchless bikes, and as the design of some of the newer Bullets hasn’t changed much, many new Bullet parts can still be made to fit older non-Bullet bikes. 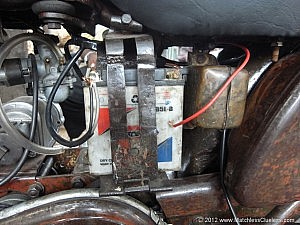 A Bullet battery and carb on my Matchless

Examples of such parts would be things such as the brake cables, chains, drive sprockets, fuel taps, bearings and of course all of the electrical items. Quite a few classic British bikes seem to be run on modern ‘Micarbs’ if they’ve lost their original Amal carburettors. I had one on my Matchless for a while but could never get it to run quite right, so bought a nice new Amal unit as soon as I moved to Hong Kong.

Other Bullet spares I had on my Matchless whilst I was living in India included the rear number plate holder, rear Lucas-style light, brake light switches, Wipac headlamp, handlebar and foot peg rubbers, headlight switch, and various other bits I’ve probably now forgotten about. 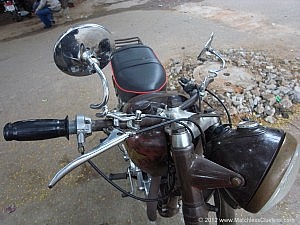 I even had a pair of rear view mirrors off a auto-rickshaw fitted for a while as you can see in the photo on the right. Most of these Enfield parts have now been replaced on my bike with the proper Matchless parts from the UK as they weren’t the best quality, however they kept my bike on the road whilst we were in Hyderabad.

These Enfield spare parts might need a little tweaking or modification, but can certainly be used as a short-term solution in many cases. Probably best to take your old part along to the local Royal Enfield shop and compare it to the options available.

The only real solution to getting proper replacements for many of the engine parts is however going to be to buy them from abroad. The price probably won’t be very cheap, especially when you add on shipping costs, but you will be sure of getting a good quality part that fits properly and should last a long time.

For me the main problem was receiving mail in Hyderabad – I never got anything sent to me by post from the UK as it all just seemed to go missing somewhere in the post system. Luckily we frequently had friends and family coming to visit quite often so I would get them to bring parts out for me.

If you have a reliable way of receiving post in India, then I would recommend that you contact Steve at AMC Classic Spares in the UK with details of your bike and the part you are looking for. Email is probably your best bet and you will find the full contact details along with parts and price lists on their website: www.amcclassicspares.com

Steve supplies nearly all of the parts I need for my bikes here in Hong Kong and is great at shipping them internationally. They make a real effort to pack things safely for shipment and in a way that minimises the postage cost.

Your comments and suggestions?

Hope this provides some useful guidance and suggestions for your guys there in India. If you have your own suggestions or suppliers you know of, please let me know using the comment form below so I can add them to this page for other readers to see.

37 Responses to Parts and servicing in India