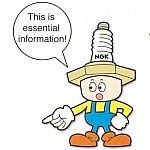 The humble spark plug: not exactly one of the most complicated parts of an engine is it? So why then is there so much confusion and misunderstandings about this simple component? I guess it’s probably because one spark plug looks pretty much like another and being hidden inside the engine, we never really get to see what it is they are doing.

Changing a spark plug is however one of few jobs that even the most reluctant of home mechanics will tackle. In fact it’s pretty much an obligatory skill if you own an old motorbike since you’ll probably want to inspect the plug as the first step for investigating any problem!

So, to help clear up some of the confusion and common misunderstandings, here’s a list of the most frequently asked questions concerning spark plugs. Click on any of the questions in grey below and that section will expand to show the answer.

What is meant by a ‘hot’ spark plug?

A ‘hot’ spark plug is one in which there is more insulation and a longer path for the heat generated by combustion at its tip to travel to the cooler cylinder head. The result of such a design is that for a given engine operating temperature, the tip of ‘hot’ spark plug will be hotter than that of a ‘cold’ spark plug as the heat will be more quickly dissipated.

A common misconception is that a hotter spark plug will make and engine run hotter – this is not the case. Engine temperature is governed by factors such as the mixture setting (carburation) and ignition timing. The engine determines the temperature of the spark plug and not the other way round! The ideal situation is to match the engine and spark plug to ensure that the spark plug tip runs hot enough to prevent fouling, but stays cool enough to prevent overheating and subsequent damage to the engine.

For more information about spark plug heat ranges, including various photos and illustration that will help explain the above more clearly, please refer to my spark plug temperature guide.

What is meant by a ‘cold’ spark plug?

In simple terms, a ‘cold’ spark plug is one which has a more direct path for heat to dissipate from its hot sparking tip to the cooler metal of the cylinder head. The result of such a design is that for a given engine operating temperature, the tip of ‘cold’ spark plug will be cooler than that of a ‘hot’ spark plug as the heat from combustion will be more quickly dissipated.

A common misconception is that a cooler spark plug will make and engine run cooler – this is not the case. Engine temperature is governed by factors such as the mixture setting (carburation) and ignition timing. The engine determines the temperature of the spark plug and not the other way round! The ideal situation is to match the engine and spark plug to ensure that the spark plug tip runs hot enough to prevent fouling, but stays cool enough to prevent overheating and subsequent damage to the engine.

For more information about spark plug heat ranges, including various photos and illustration that will help explain the above more clearly, please refer to my spark plug temperature guide.

What is a resistor plug?

A resistor plug is a spark plug that has a built-in resistor which is designed to suppress electrical interference caused by the spark. Such interference might be ‘heard’ as crackle on a radio or ‘seen’ as interference on a TV. This wasn’t too much of a problem back in the day, but this sort of interference can play havoc with sensitive modern electronic devices and even the on-board engine management systems of some vehicles.

The majority of vehicles can run quite happily on resistor spark plugs, and in fact, most manufacturers recommend and fit them as standard. Some modern cars even now apparently require that resistor plugs are fitted as the engine management systems use the feedback from the plugs as part of the on-board diagnostics system.

However, classic motorcycles do not tend to have such a powerful ignition system as modern cars, especially those that are fitted with magneto type ignition. The extra effort and voltage required to make a spark pass through the resistor as well as jump the spark plug gap may just be too much causing weak, intermittent or complete loss of a spark. Obviously this isn’t good, hence non-resistor type spark plugs are recommended for such older vehicles.

Some spark plug caps also feature an in-built resistor for exactly the same reason and are also generally unsuitable for older vehicles. Fitting both a resistor plug cap and a resistor plug is completely unnecessary and double-trouble for classic machines with twice the resistance for the ignition system to overcome.

What are the advantages of a platinum or iridium spark plug?

A platinum or iridium spark plug refers to the material that the centre electrode is made from. Standard electrodes are normally made from copper which works well and is reasonably cheap, however more expensive metals such as platinum, iridium or gold-palladium alloy may be used instead.

Having a finer centre electrode means that the voltage required for the spark to jump across the spark plug gap is reduced as the charge is more concentrated at the tip. This can potentially benefit classic bikes (especially those with magneto ignition systems) by making it easier for the engine to fire a spark. They should also last longer than a standard plug making it necessary to change plugs less often.

However, the verdict is still out whether these ‘performance’ spark plugs are worth the extra expense and results will probably vary from bike-to-bike and owner-to-owner. One thing to watch out for though is that some of these plugs now only come in resistor types (see other FAQ’s for what this means) which are generally unsuitable for classic motorcycles.

Which spark plug is best for my car or motorbike?

The short answer is that the optimum spark plug for any vehicle is usually going to be the one that was originally recommended by the manufacturer!

In order to optimise any engine, the manufacturer will spend months (or years) of time and effort conducting tests and research. The spark plug cannot be considered in isolation since it affects (and is also affected by) other engine parameters such as fuelling (carburettor settings), ignition (timing), fuel quality, expected running conditions and many more. In 99.9% of cases the manufacturer probably knows best and so we should stick with what they say.

There are a few exceptions to this rule though. The first is where a particular type of spark plug is not available because it has been discontinued or because of what is sold where you live. For example, in the case of my 1951 Matchless motorbike, the manufacturer specified a KLG FE80 spark plug. Not so easy to find now! So we must try to work out what the ‘modern’ or current equivalent plug is for our particular application. In this case the spark plug manufacturers catalogues can come in handy as they often contain equivalence table, both between different manufacturers and from discontinued models. For classic vehicles, speaking to the owners club or other enthusiasts is probably the easiest way forward as someone else has probably already come across the same dilemma and found a solution.

Another exception for when the manufacturers spark plug recommendation might not be optimum is where the engine has been changed from its original specification, for example when an engine is tuned for racing. If you know enough to tune an engine, you’ll already know enough to select teh right spark plug so I won’t go into that here.

What is the correct tightening torque for a spark plug?

In all cases though, the spark plug should be initially tightened by hand in order to ensure that the thread is not damaged. Alternatively a length of rubber tube may be slipped over the end of the plug and this used to insert and initially tighten it up where additional reach is required. Inserting a spark plug using a socket to start with is likely to result in thread damage as it is more difficult to feel whether the thread is tightening correctly or threading. It is difficult to apply too much force resulting in thread stripping when tightening by hand.

An alternative to using a torque wrench is to tighten the plug as tight as possible by hand and then tighten it an extra 1/2 to 2/3 of a turn (180 to 230°) using a socket to squash the washer. When reusing spark plugs, the washer will already have been squashed by during the original fitting and so the plug should only be tightened an extra 1/12 of a turn (30°) beyond hand-tight using a socket.

Why is the insulator section of a spark plug ribbed?

The outside of the insulator section of a spark plug (the white ceramic park which protrudes from the cylinder head over which the spark plug cap is fitted) is ribbed to help prevent flash-over.

Still not sure about something spark plug related? Have I missed something out of the above list or gor something wrong? Please leave me a comment below and I will do my best to update the FAQ’s accordingly. [sc:disclaimer]
Top