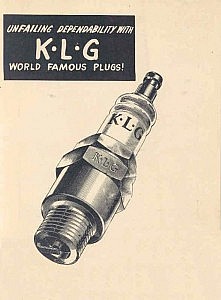 A KLG spark plug was once the standard fitment to many classic motorcycles, including both of my two Matchless G3’s. However it is not a make you really hear too much of these days with NGK and Champion dominating the market.

KLG plugs are still available from some specialist sources (such as the Green Spark Plug Co.) but they aren’t exactly mainstream any more and certainly aren’t available out here in Asia (at least that I have found!).

For most people with classic motorcycles it is usually easier, cheaper and more convenient to substitute a modern equivalent from one of the mainstream manufacturers in place of the original KLG model. And hence the point of this page – to understand the differences between the original KLG plug types and determine what the modern NGK and Champion equivalents are.

For more information on Mr. Kenelm Lee Guinness, the man behind the ‘KLG’ brand name who developed his innovative spark plug for racing using mica as an insulator, check out this Wikipedia article.

This article includes the following sections:

The codes used to denote each particular type of KLG spark plug are similar in arrangement (although not in lettering) to the NGK code system, and are fairly easy to decode once you know what each section indicates. The following table gives the meaning of the most common letters found in the KLG numbering system.

The numbers that follow the above letters in the KLG spark plug code give the heat range of the spark plug. A low number is a hot plug and a higher number is a cooler plug. The lowest rating I’ve seen mentioned in literature is a 20, with 70 to 80 being normal for most classic motorcycles, and 220 being the highest I’ve come across for a really cold plug. For more about spark plug temperatures, read the ‘Spark plug heat ranges’ page.

For the meanings of spark plug codes used by other manufacturers such as NGK, Champion and Bosch, please refer to my ‘What spark plug?’ article.

The following tables detail the modern equivalent NGK and Champion spark plugs for the KLG ‘FE’, ‘F’ and ‘FS’ series of 14mm plugs typically used with classic motorcycles. Tables are also shown for the projected nose versions of these plus (plug codes ending with a ‘P’).

The alternative NGK spark plug numbers given in brackets are ‘upgrade’ or ‘performance’ types which usually have a finer or precious metal (e.g. platinum or iridium) central electrode which is designed to give improved sparking. However the improved performance seen on a classic motorcycle is debatable and these plugs are typically much more expensive than the standard ones, so they might be worth a try but you will have to weigh up cost versus any noticeable difference to engine running. Some owners do however report easier starting or improved idling when using these plug types. You pay your money and take your choice!

I have drawn up the following tables by cross-referencing the NGK and Champion websites and catalogues with various archive KLG literature and also several reference books. Many of the older spark plug codes are now obsolete so the tables list only the current part numbers, so you may come across old stock that is also equivalent (e.g. a Champion N5 is now a N5C). However it would confuse matters to include all historic variations here. If you need to look up other obsolete plug models, the best reference material I have found is the NGK motorcycle catalogue which gives compatibility listings for all plug manufacturers.

Also note that the heat ranges of the different manufacturers don’t always directly correlate. It is usually safe to vary by one heat range either side of the recommended plug as modern plugs have a wider operating temperature than older models, but better to err on the colder side where possible.

This is a range of 14mm spark plugs with a 3/4″ thread reach. They are non-resistor plugs and have a standard (non-projected) nose. Examples include the following models: FE50, FE70, FE75, FE80 and FE100.

This is a range of 14mm spark plugs with a standard 1/2″ thread reach. They are non-resistor plugs and have a standard (non-projected) nose. Examples include the following models: F50, F70, F75, F80 and F100.

This is a range of 14mm spark plugs with a short 3/8″ thread reach. They are non-resistor plugs and have a standard (non-projected) nose. Examples include the following models: FS50, FS70, FS75 and FS100.

This is a range of 14mm spark plugs with a extra-long 3/4″ thread reach. They are non-resistor plugs and have a projected nose as designated by the ‘P’ suffix. Examples include the following models: FE55P, FE65P, FE85P, FE125P, FE95P and FE135P.

This is a range of 14mm spark plugs with a standard 1/2″ thread reach. They are non-resistor plugs and have a projected nose as designated by the ‘P’ suffix. Examples include the following models: F55P, F85P and F95P.

This is a range of 14mm spark plugs with a short 3/8″ thread reach. They are non-resistor plugs and have a projected nose as designated by the ‘P’ suffix. Examples include the following models: FS45P and FS55P.

None of the KLG spark plug models mentioned in the above table have internal resistors since they mostly pre-date in-car radios and hence interference suppression was not an issue. Resistor spark plugs (e.g. NGK plugs with an ‘R’ in the code) should technically be used where possible to reduce interference, but these are not usually suitable for use with magneto ignition systems.

Hopefully the above article has helped to explain the spark plug reference numbers used by KLG and has pointed you in the direction of an appropriate NGK or Champion equivalent plug. This is aimed as a guide and there may be some variations between vehicles due to local climate, setup, fuel and other such factors. If in doubt as to which plug to fit, always go with the cooler option first as at worst this will result in plug fowling, whereas choosing a spark plug that is too hot could end with a hole being melted in the top of your piston. Not good!

Please use the form below to leave me your thoughts and comments, especially if you have a particular experience with these spark plugs that you would like to share with other readers.