A guide to some simple steps you can take to improve the brightness of the headlamp on your classic motorbike.
Home » Electrical guide index » Motorcycle lighting » Improving your headlights 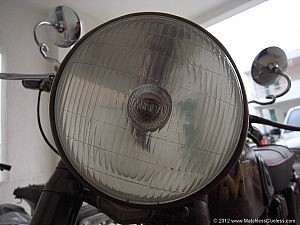 The headlamp of my Matchless G3Ls

Let’s face it, the headlights on old bikes (especially those still running 6 volt electrics) are not exactly dazzling are they? However, there are a few things that you can do to improve matters quite considerably and that is the objective of this quick ‘how to’ guide.

Ok, so you’re thinking “why not just put in a high wattage bulb?” aren’t you? Well that could certainly be an option in some cases (although it needs some careful thought), but lets just put the obvious to one side for one moment and look at some other options first.

This article covers the following topics:

The headlamp and reflector

Let’s start by looking at the headlamp unit itself. Over time, the outer glass may have become scratched and dull and the mirror finish of the reflector could well have lost its shine. Both of these will have a dramatic effect on the light output. Similarly, cheap reproduction or pattern headlight units are often not as good as the original (Lucas?) models, either in terms of the quality of the finish (shininess of the mirror etc) or on the actual beam pattern (how the light shines out onto the road). Either way, a nice new quality headlamp unit will make the world of difference to what you can see of the road ahead.

The quality of the wiring

Something else that can have a surprising effect of the headlamp brightness is the quality of the earth connection back to the battery. The electrical circuit between bulb and battery is made up half of the wiring and half of the return via the frame of the bike. Think about how many rusty joints there are between the two: bulb to headlamp reflector, headlamp reflector to headlamp case, headlamp case to forks, forks (via greasy bearings) to the main frame, etc, etc. 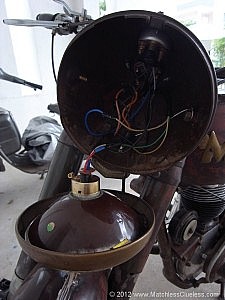 The wiring behind my Matchless' headlamp

A quick check can be made using a multimeter by measuring the resistance between the headlamp case (or reflector if accessible) and the earth connection of the battery. More than a few Ohms means that voltage is being wasted trying to get the current through all these dodgy joints, giving less volts left at the bulb to light up the elements. The best option is often to run a new cable from the earth connection on the back of the headlamp bulb holder direct to the earth terminal of the battery. This should eliminate any resistance and give the full battery voltage at the bulb.

Note that 6 volt electrical systems are far more susceptible to these kinds of power losses than 12 volt systems. Power (in Watts) is defined as voltage (in volts) multiplied by current (in Amps). You can therefore have the same power from a low current and high voltage, or by a high current and low voltage. A 60W bulb in a 6 volt system will need 10 Amps of current (quite high – you only get 13 Amps out of a mains outlet at home!) whereas in a 12 volt system it would only need 5 Amps.

The problem with high currents are that they tend to heat up the wires as they pass through and this all loses energy from the system. The higher the resistance, the higher the heating effect and the more power that is lost. This is the same reason why mains power on the national grid is delivered at low current but very high voltage so as to minimise the resistive losses on route. So a 12 volt electrical system (or 24 volts as used on trucks) is much more efficient than the old 6 volt systems used on most classic bikes.

The wiring and connections inside old motorbike lighting switches (and also many cheap modern reproductions too) is often quite fine and poor quality. Power can therefore be lost here too in the same way as described above for bad earth connections. One way around this is to fit a headlamp relay close to the bulb (perhaps inside the headlamp case if possible) which has direct connections using high quality wire direct to the battery terminals.

The original switch is still used, but now rather than turning the current on to the bulb directly, it now only controls a much lower current to operate the relay which then in turn switches the high current to the bulb. It’s a relatively cheap and straightforward job if you’re reasonably competent with motorbike electrics. Of course for dual filament headlamps (with high and low beam) you will need two relays, one for each filament.

Ok, so back to the obvious solution – changing the bulb. This isn’t just a case of the higher the wattage the better though! The type of bulb is also very important too. The old standard incandescent bulbs have been pretty much replaced now by modern halogen bulbs which give much more light output for a given power rating.

You should also consider the quality of the new bulb you buy. Now I’m not suggesting that you need to pay a ridiculous amount for some fancy ‘boy-racer style’ bulbs, but nine times out of ten, decent branded bulbs are probably going to give more light output and last longer than cheaper unbranded versions of the same thing. You pays your money and takes your choice as they say!

When it comes to selecting the optimum wattage of the headlamp bulb, it has to be a compromise between the amount of light you want / need and how much power your poor old generator or alternator can give. The dynamo on my 1951 Matchless is rated at about 45 Watts – that’s 30 Watts (as standard) for the headlight, 3W for the tail light (no brake light fitted), 3W for the front pilot light and 2W for the speedo illumination. That comes to 38 watts in total leaving a few left over for charging the battery. Clearly if I changed the headlamp to a 60 Watt monster then supply would be less than demand and the battery would soon run down.

So we need to be sensible. Make a list of all the electrical items and bulbs fitted to your bike and write alongside their power (in Watts). Remember to include electronic ignition (if your bike has it) as that’s fairly useful to have working too! You can probably ignore the horn and such things that are used only intermittently. You should then have some idea of what sort of headlamp bulb power you can get away with, remembering of course that you need to leave some to recharge the battery.

Your riding style is also important. The full dynamo / alternator power will only be available when the engine is revving beyond a given RPM. So if you ride in lots of heavy stop-start traffic, bear in mind that the charging system will give less output on average that if you only ride up and down the motorway at speed all the time.

An example on my Matchless

Here in India, I’m finding it a little difficult to source appropriate 6 volt headlamp bulbs at the moment. I currently have a choice of two; a 18/18 Watt old style incandescent bulb and a more modern 25/25 Watt halogen bulb in which the low-beam filament has blow. Hmmm, difficult choice hey! So I thought I’d take the opportunity to see exactly how much difference in light output I got between the two bulbs.

The photos below show the results; both were taken at the same exposure with the headlight on full-beam with the engine not running in the car port outside my house. Whilst by no means scientific, they do give a good idea of the sort or difference you might expect. 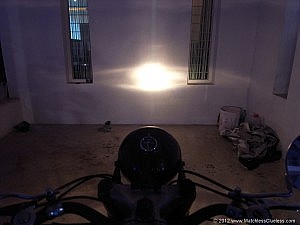 The illumination from a 18 Watt (non-halogen) headlight bulb 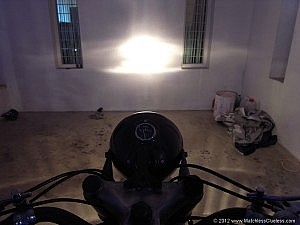 The illumination from a 25 Watt halogen headlight bulb

As you can see, the slightly high wattage bulb makes quite a difference to both the intensity of the main beam at the centre, and also to the peripheral illumination to the sides. I suspect that most of the difference is due to the bulb type (halogen versus standard incandescent) but no doubt the few extra Watts also helps!

I want to fit a 35/35 Watt halogen unit when I can get hold of one (in conjunction with some LED’s for the other lights), but I think this is about as far as I can go for my old bike. I’ll post a picture of the new light output when I do.

So fitting a higher-wattage high quality halogen headlamp bulb will make a big difference, but it’s going to be counterproductive if you’re bikes charging system can’t keep up with the increased demand. So make sure you select the wattage appropriately, perhaps in conjunction with some LED’s to save some Watts elsewhere, so that you don’t just end up stranded with a flat battery.

But remember that there are various other things you can do with your bikes wiring to improve the headlamp output in addition to the obvious changing of the bulb. These are free in that they don’t require any extra power, and are therefore more desirable first course of action.

21 Responses to Improving your headlights