Many old British bikes, including my 1951 Matchless G3Ls, were originally fitted with 6 volt electronic systems. Now I’m not sure exactly why 6 volts was chosen, but I’m guessing it’s something to do with the ‘cell’ voltage of a lead acid battery being around 2.1 volts and three cells giving a battery unit of a convenient size. 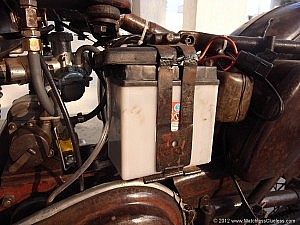 The starting point for me - my problematic 6v battery

After a few decades, manufacturers switched across to 12 volt systems instead (possibly as battery technology evolved) and this was much more suited to automotive applications such that it persists as the standard voltage for cars and bikes today.

12v systems are less susceptible to the effects of resistance in the wiring loom. For any given power, a 12 volt system needs to supply only half the current (Amps) of a 6 volt system and hence resistive losses in old wire, through rusty or lose connections, or thin wires in poor quality switches etc and much less of a problem.

However, the main advantage for classic bike owners of converting to 12 volts is the better availability of modern bulbs and other electrical accessories (including batteries, horns, LED bulb conversions, etc) at this higher standard voltage.

In the case of my Matchless, I had initially wanted to stay with the original 6 volt system. However, whilst living in India, I found that good quality 6 volt bike components were incredibly hard to track down. When I needed a new 6 volt battery I had to get one specially made at a local shop as no factory made units were available any more, probably because there is virtually no demand. Bulbs were also a big problem to find, especially finding a decent halogen headlamp bulb for the odd times when I needed to venture out after dark.

However, the final straw came when the 6 volt battery I had specially made started to fail after only 3 months or so of service. It wasn’t charging properly, neither on the bike or using a mains charger. I didn’t really want to bother going to the hassle of getting another one made if it would only last another few months. On top of this, I was looking to fit some indicators to the bike in the near future (to make riding feel that little bit safer) and preferably wanted to use LED bulbs to minimise the additional load on my small Lucas dynamo. But these are hard to find in the 6 volt positive earth variety!

This article contains the following sections:

Now I had previously fitted a modern solid state “DVR2” voltage regulator from Dynamo Regulators Ltd to my Matchless after the old mechanical Lucas AVR started playing up. You can find details of the installation in my guide here. 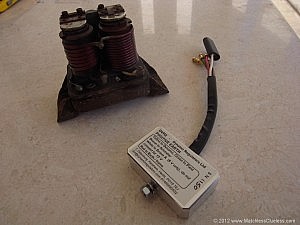 One feature of this regulator is that it can give a selectable 6v or 12v output from a standard 6v Lucas dynamo, so this gave me the opportunity to convert to 12 volt electrics with just some simple rewiring and changing a few bulbs.

Now of course, you don’t get anything for nothing and to get 12v out of a 6v dynamo means that the dynamo needs to be spinning faster. There are various options to rewind the dynamo to give 12 volts so that it gives the higher output at standard engine speeds, but the expense and availability of parts in India meant that this wasn’t an option. At least not for the time being anyway.

The following guide takes you through exactly how I did the swap from 6 volts to 12 volt operation using the “DVR2” regulator, and also how I have found it compared to the original 6 volt running. 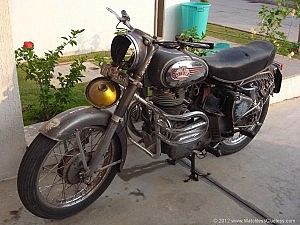 I just need to borrow a few bits...

The first step is obviously to get some new 12 volt parts for your bike – mainly bulbs and a battery. I decided to leave my existing 6 volt horn in place as that should work fine on 12 volts (at least for a while!) and as it’s a cheap pattern part I’m not too worried if it eventually gets fried. If you have the original Lucas unit you might want to swap it though to avoid damage.

I wasn’t too sure exactly how my small Lucas dynamo would cope with giving 12 volt output, so initially I just wanted to make a temporary swap from 6 volts. Therefore my other bike (a 1970 Royal Enfield Bullet) provided a useful temporary donor for bulbs and battery.

Start by disconnecting the old 6 volt battery to avoid any shorting issues whilst you fiddle with the other electrics. Then take out the headlamp, pilot lamp and tail lamp bulbs and replace with the new 12 volt versions.

Make a double check around the bike to make sure that you don’t have any other 6 volt electrical items fitted that could be fried at the higher voltage (especially if you have electronic ignition). 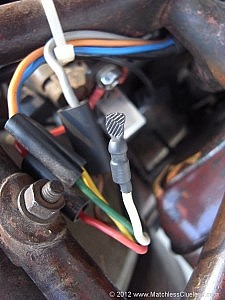 Rewiring the “DVR2” voltage regulator to operate at 12 volts is a simple case of removing a single wire from the ammeter connection. In standard 6 volt operation, both the brown and white leads out of the regulator unit are connected to the ammeter.

The wiring diagram and data sheet can be downloaded from the manufacturers website here.

With the white wire removed from the ammeter connection, you then need to make sure that it is insulated so that it doesn’t short on the frame etc. I used some heat-shrink tube to cover the bullet connector at the end of the wire. I guess you could just cut this off, but that would make it more difficult to revert back to 6 volt operation in the future if needed.

Step 4 – Refitting the battery and fuse

After a quick double check of the wiring to make sure it all looks in good order, the new 12 volt battery can then be installed.

It is advisable to have a fuse installed in the system to protect it in case of short circuit. In 12v mode, the current needed to power the various electrical components will be halved (assuming you have fitted like-for-like wattages) as power (Watts) = voltage (volts) x current (Amps). It is therefore sensible to reduce the fuse rating installed to ensure full protection. 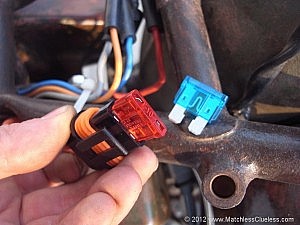 Lastly a change of the main fuse

At 12 volts, the current will be halved so the 45 Watt output of my dynamo equates to a current of just under 4 Amps (45W / 12v = 3.75A). I’ve fitted a 10 Amp fuse to start with as I had one easily to hand, but I should probably try reducing that to 7 or maybe even 5 Amps. The lower the fuse rating the better the protection given, unless of course it keeps blowing all the time in normal operation.

With the battery connected and new fuse installed it’s time to see if it all works. Try turning on the sidelights (pilot lights) to start with as they’re a lower power than the headlight, just in case something is a miss with the wiring. If that seems good, try the headlamp and brake lights. Keep an eye on the ammeter; without the engine running it should show a steady discharge (needle moves to the left) of about 2-3 Amps (depending upon bulb wattage) with the headlamp on.

If all seems well, start the engine and then recheck that all of the lights are still working. Now is probably a good time to go for a test ride, although a run in daylight with all the lights on is sensible just in case there are problems, rather than going straight out in the dark!

Check the ammeter reading as you ride a long at cruising speed. With the lights all OFF it should show a positive charge (needle moves to the right) going into the battery. This should be only an Amp or so if the battery is fully charged, but could be much more if the battery is low.

At low speed with the headlamp turned ON the ammeter should show a steady discharge, but as engine speed increases the discharge should reduce and at cruising speed it should just about balance (needle in the centre). If the ammeter still shows a considerable discharge even when riding along at reasonable speed, then it is unlikely that the charging system can cope with load you are asking from it for any extended duration. In this case you should maybe consider reducing the headlamp bulb wattage or perhaps changing other bulbs to LED types which need much less current (see my guide here).

And that’s about all there is to it! You now have a 12 volt Matchless and a world of cheaper and more readily available bulbs, batteries and LEDs at your fingertips. The great thing about the DVR2 regulator is that you can easily go back to 6 volts at any time just by reconnecting that extra wire. Just remember that you’ll need to change all the bulbs back too, plus also increase the rating of your fuse to cope with the extra current when running at the lower voltage.

I’d just like to point out that I have no connection whatsoever to any of the companies or products I have mentioned, other than in the case of the DVR2 regulator product having fitted one to my Matchless and been quite pleased with the results. Please make up your own mind about the suitably (or otherwise) of any products or services for your own requirements as these may be different to mine.

77 Responses to Converting to 12 volts