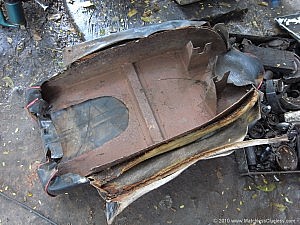 The underside of the old seat - rather rusty!

When it was on the bike, the seat looked a bit tatty but quite secure.  However when it was removed from the bike and we looked underneath, that was another story.

I had planned to get the seat re-covered anyway; this is an everyday procedure here in India and little shacks can be found on most main roads selling new covers ready to be fitted to all sorts of bike seats.

But this seat would require more than just re-covering as the edges had rusted away and the mounting points were getting rather thin.  It looked like water had got into the foam via some cuts in the outer fabric and this had acted like a sponge holding the water next to the metal which inevitably then succumbed to the rust.