At the mechanics shop 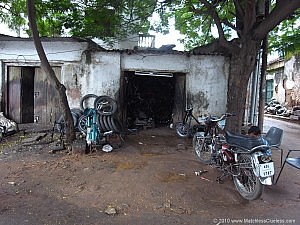 So, with the bike running, the paperwork checked and the deal done it was off to the mechanics shop with the bike for the necessary tinkering, adjustments and servicing before taking it out on the road.  So how do you get a motorbike which has no working brakes, no throttle cable, no fuel lines and some rather flat looking tyres to the mechanics.  Well in India, you ride it of course!

Now I had rather stupidly assumed that we would get a ‘trolley’ (a sort of auto-rickshaw with a flat bed on the back for carrying goods), or at least that we might have pushed the bike the kilometre of so.  Indeed the mechanic did initially set off pushing the bike, but it turned out that this was to the tyre shop just around the corner to get some air in the tyres!  After that, a makeshift petrol tank was setup from an old water bottle hung from the handlebars with some tubing to the carb.  And off the mechanic set…  I’m still not really too sure how he managed to ride a bike with no throttle cable attached.  They told me using the tick-over screw on the carb, but still my mind boggles.  And to top it all, he arrived there about five minutes before we got there in the car, so it’s not as if he just pootled along slowly either! 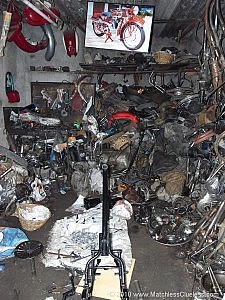 Inside the Alladin's cave at the mechanics

And so we arrived at the mechanics shop.  Not quite was I was expecting as I’m sure you’ll agree after seeing the photo above.  But a complete Aladdin’s cave of old bike parts nevertheless.  Mostly old Royal Enfield Bullet parts (the bike of choice for the cool Hyderabad biker), but with a good selection of odds and end from everything ranging from BSA’s, AJS’s, Triumphs, Nortons and of course Matchless.

Now at home I’m a firm believer in neat and tidy workshops – every spanner, socket and screwdriver arranged in it’s appropriate place.  But this is India and things work very differently and as I have learned in my time here, the best course of action is to go with the flow and hope for the best.  And so the servicing of my Matchless started….