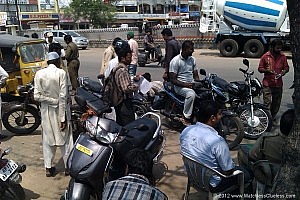 Patiently waiting for the bike to be inspected

I had an interesting trip out on the bike today: The final stage of getting the registration paperwork complete is that you have to take the bike to the local “RTA” (road traffic agency?) office for an inspection.

I guess it’s a bit like taking the bike for an MOT back in the UK, only without any of the silly complicated testing bits!  The officer is supposed to check the roadworthiness of the bike, but I think as long as it has two wheels and managed to get itself to the office, that’s about all that’s required really.

Apart from the pencil rubbings of the engine and frame numbers of course, which seem to be mandatory.  No problem with the engine number – that’s in a nice obvious place and is well-raised for easy rubbing.  But the frame number is a little more tricky being hidden as it is under the seat.  I was prepared though and had slackened off the seat at home so it could be easily lifted up.  The position right in the corner of the frame and faintness of the punched letters after 60+ years made life a little difficult, but they seemed to get something they though was acceptable in the end. 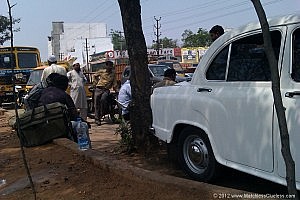 You can see what a generally chaotic process it was from the photos.  My driver and the agent handled most of it, whilst I kept a low profile in the background so as not to complicate things as a foreigner.

The RTA office is actually on the other side of the street to the inspection area which seems to have been carefully positioned to keep the inspection offices in the shade of the trees.  I don’t blame them, but not sure I would have ever found the right “inspection centre” myself looking remarkably similar as it does to the roadside chaos all along that bit of highway.

4 Responses to Completing the registration