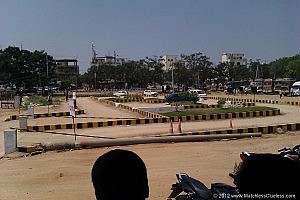 I passed my Indian motorbike driving test today – hurray!  I now have a full motorbike licence for the first time having never bothered to go further than a CBT course and L-plates back home.

Now I know there will be a lot of comments from back in the UK that Indian driving tests are a bit of a joke where you only have to do a quick figure-of-eight to pass.  But I can now say from first hand experience that this is completely untrue!  After completing the figure-of-eight, you then have to do a few left and rights, drive round a corner, negotiate a bit of a chicane, drive along a narrow raised section (“the balance test”) and finish by riding over some speed humps.

The whole test is a least a 100m long and lasts for well over a minute!  I was virtually exhausted by the end of it (actually, that last bit is quite true as anything in the current 32°C heat is quite tiring).

The test takes place at a special centre where various little roads are laid out for both bikes and cars, plus a nice little grandstand to watch from.  The car test is also quite amusing to watch – drive a figure-of-eight (seemingly a very popular maneuver here!) and then do some forward and reversing parking in a little H-shaped section, and you’re done.  Sounds simple, but you’d be surprised how many people were taking wrong turns, having to go back-and-forth to get around the figure-of-eight and nearly colliding with the walls.  All very entertaining to watch!

Joking aside, the motorbike test track was actually much trickier than I was expecting as the “roads” were quite narrow (about footpath width) and the turns and chicanes quite tight.  Matchless’s aren’t exact the smallest and lightest of bikes (compared to them more common scooters and little Honda’s everyone else was using) so it was actually quite a good test of balance, at least for me anyway.  I wasn’t sure I’d be able to get round without needing to put the odd foot down, but I did so am now quite proud.

Having said that, a girl who I watched fall of her little Honda scooter driving across the car park on her way to the test managed to negotiate the test track without problem, so I guess it wasn’t exactly the most difficult of trials.  But on the other hand, the next person seems to go virtually the whole way round walking the bike through with both feet down, so who knows!

Apparently a lot of people do fail, so I guess the test serves the purpose.  There’s also a trick bit which catches many people out.  It’s a small island in the middle of the widest section of the track with a keep left sign which is easily missed so that you go the most direct way which is to the right side.  Luckily though I had been warned in advance of this cunning trick so was well prepared for it!

Anyway, finished the test no problem and then guess what happened next? My driver was just riding the bike across the car park to stand it in the shade whilst the paperwork was completed, when the clutch cable snapped.  If it had broken about 20m before I would have been stuck mid test, which could have been fun!  So quite lucky there. 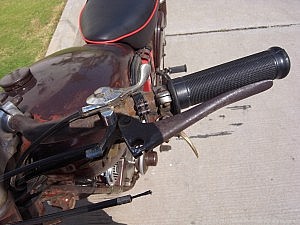 The clutch cable - snapped after my test!

I let my driver take charge on the drive back home given that he would be a bit more able to judge the traffic and signals so that we wouldn’t have to stop once moving.

I went pillion instead, which is also rather interesting on Indian roads as you’re that much closer to the tailgating truck with horns blaring and probably very little in the way of brakes.

But we slowly made it back home safe, and without too many crunched gears.

One Response to My Indian driving test