Went out for a ride this afternoon and stopped off at a friends house on the way back.  When I came to leave, I went to put my foot on the kick-start and… it had gone!

I guess it must not have been tightened up properly after the mechanic had been working on the gearbox earlier in the week.  Didn’t hear it fall off but guess one of the potholes along the lanes must have sent it bouncing off into a ditch somewhere.  A bit annoying, but I did learn how to push start a Matchless in order to get home!

Initially I wasn’t too concerned as I though it was just a cheap Royal Enfield lever going by the name embossed on the rubber.  But it turned out that actually, the spline size on the Enfields is slightly smaller and hence a replacement wouldn’t be too easy to source after all.  A phone call to the mechanic and he said he thought he would be able to get one, but it would take a couple of days.  So I guess I would just have to wait and see what he came up with… 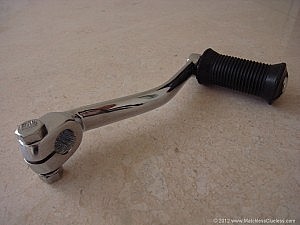 Update: 1st March
The new kick-start lever has arrived today from the mechanic, and it looks much more substantial than the old one which had fell off a few days before!

Put in on the spline coming out the gearbox and it seems to be a treat, but couldn’t seem to get it to nip up tightly so that it always had a bit of play back and forth on the shaft after a few kicks of the engine.

I suspected that the tightening bolt may not have been up to much, and after a few more attempts at clamping up the kick-start so it didn’t move the bolt gave way.  Turns out it was made from some dodgy steel so was about as strong as a plastic bolt would have been.  But no problem to change, so picked up a suitable replacement from the local shop and now the lever is nice a tight!