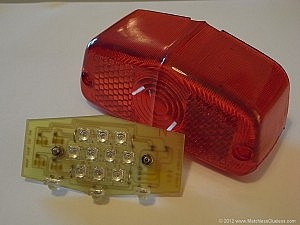 My prototype LED rear light next to a Lucas 564 lens

I was asked how the LED rear light board I’ve designed and made for the Lucas 564 rear lamp of my Matchless motorbike compared with a standard 21/5W filament bulb.

I knew from the development work I’d done over the last couple of months that it was bright, but I needed to see how bright it actually was in practice once it was installed in the lens of the Lucas lamp.

And so I set-up a side-by-side comparison using two spare rear light units I had in my spares box. Actually these were pattern reproduction spares that I bought back in India, not genuine Lucas ones, as you might be able to tell from the diffuser pattern. But this shouldn’t make much difference.

I installed the two lamps, one with a standard filament bulb and one with my LED array, one above the other on a piece of white polystyrene foam. Both lamps were wired in parallel to the same bench power supply (set at 12.0 volts) so had the same voltage and current available to them.

The photographs below show the test set-up and the comparison between the filament and LED lights in the various tail, brake and tail + brake scenarios. Note that the camera’s exposure settings were different between each picture and so it isn’t possible to compare relative brightnesses between photo’s, but hopefully it gives a good idea of how the LED unit looks in practice. Clicking on any of the pictures will open them up full-size if you want a closer look.

As you can see, the LED lamp is brighter than the standard filament bulb in all cases. When I came to take the test rig apart I noticed that the filament bulb was actually an unusual 26/8W unit (not sure where that came from!) as opposed to the normal 21/5W bulbs used in these lamps, to the bulb is probably a bit brighter than it would normally be.

Perhaps more importantly though is the size and pattern of the illuminated area of the LED lamp. The light from the filament lamp goes in all directions, some being lost bouncing around inside the lamp, some brake light lost illuminating the number plate, etc, and so not all of the light produced goes out the back where you need it.

The LEDs on the other hand are directional so the light is pointed where you want it; the number plate lights point to the number plate and the tail and stop lights point backwards. Having a total of 10 bright spots from the red LED lamps (versus only 2 bright filaments of a normal bulb) also makes the bright spot inside the lens cover a bigger area, which I think will give improved visibility. 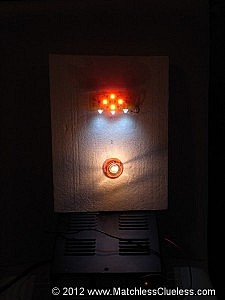 Comparison without the red lens 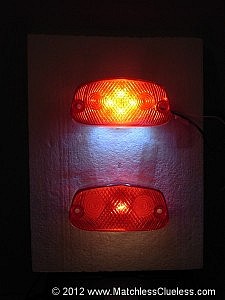 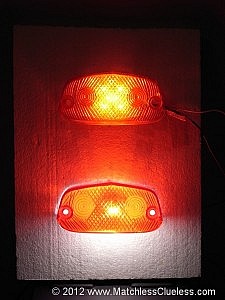 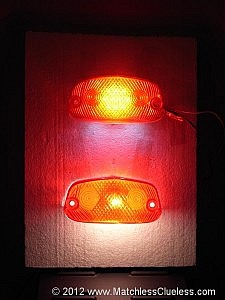 Brake and tail light together comparison