My prototype LED rear light array and a Lucas 564 lens

I’ve been working on a project to design and produce an LED light unit for the Lucas 564 rear lamp of my Matchless motorbike for the past month or two. I now have a working prototype which I’m quite happy with, so thought I’d share some photo’s of it with you.

The reason behind this project is that before I had my Lucas dynamo reconditioned, my bike wasn’t generating enough electricity to keep the battery topped up when riding with the lights on all the time (a legal requirement here in Hong Kong).

I had purchased a couple of generic LED ‘bulb’ units previously, but had found that these either weren’t as bright as a traditional 21/5W brake/tail filament light bulb, or else didn’t seem to last that long. I couldn’t really find what I was looking for in the shops or online, so I thought I would design my own instead.

Before I started designing, I drew up the following specification. My new LED light unit had to:
– fit inside my Lucas 564 rear light lens
– have both stop and tail light functions
– operate on a wide voltage range for any battery charge condition
– not be sensitive to the polarity of the wiring (positive or negative earth)
– be at least as bright as a standard 21/5W filament bulb
– give good illumination of the rear lens and a wide angle of view
– also illuminate the rear number plate through the lower clear lens opening
– have low power consumption

I must have made about 10 different prototypes over the last few months using various different circuitry to control the LED lights. This part is much more complicated that with a normal filament lamp as LEDs are very sensitive to polarity (they only work when connected the right way round, and blow if wrongly connected) and the the amount of voltage they are fed with (too little they don’t light, too much and again they can easily blow).

I won’t go into the details here, but I think that I’ve finally cracked it with the final prototype. It uses special IC’s (integrated circuits, or ‘chips’) to control the exact current that goes to each LED irrelevant of the battery voltage. This means that they always work at peak performance and brightness, but without risk of them failing through being over-driven.

There are a total of 10 red LEDs – 4 for the tail light function and 6 for the brighter stop light function. A further 3 white LEDs point downwards to illuminate the number plate and these come on with the 4 red tail lights when the sidelights / headlights are switched on.  The current drawn by the whole unit is only a tiny fraction of that needed by a traditional 21/5W bulb as LEDs are that much more efficient.

So here is a gallery of pictures of my prototype light unit for you to have a look at. Click on any of the pictures to open them up at full-size. 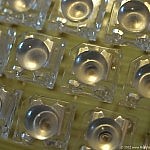 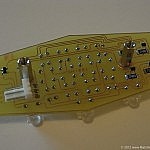 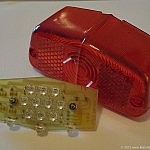 4 Responses to LED lights for a Lucas 564 rear lamp