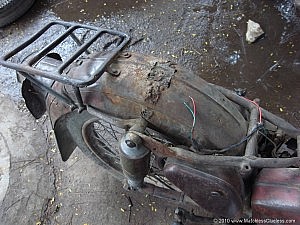 The rear mudguard before repair 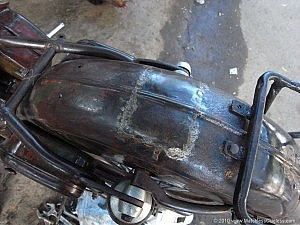 The rear mudguard after repair

As I mentioned in my earlier post here, the initial strip down of the bike revealed that both the front and rear mudguards had partially rusted through around their respective mounting points.  Whilst they were still fairly secure for the time-being, they would obvisouly require some repair and renovation work at some point to prevent them falling apart completely.

Being an engineer, one of the things I love about India is that all the trades and skills that dies out decades ago in the UK are still alive and well.  Panel beating is one of these skills and I was assured by the mechanic that the repairs needed were relatively minor.  I was still a little apprehensive though when the mudguards were sent away to another shop for this work to be completed, but when they came back I was quite pleased.

The brief I gave them for the work was to make a repair so as to match the same curved and shape as the original mudguards, but that they should not try to hide the repair beneath paint or filler.  In my mind, this repair work is part of the story and history of the bike, and so should be visible rather than hidden away.  I also quite like to be able to see the workmanship and skill (or lack of it!) that has gone into the job; it’s just another point of interest.

At this point, my master plan about the ‘restoration’ of the bike was still a secret from the mechanics as I was still trying to get it clear in my head, but more about that later… 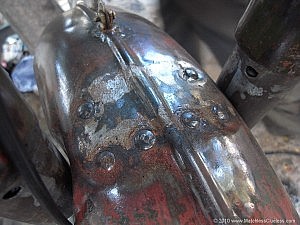 The front mudguard after repair

Anyway, here are a few ‘before and after’ photographs for you to show what the condition was like before the repairs were carried out, and how the mudguards look now.  I’ll leave you to make up your own mind as to the quality of the repairs!  But I’m quite pleased with how they’ve come out.  A bit of filling, smoothing and painting and they would be indistinguishable from new (well almost!), but that would seem a shame, wouldn’t it?