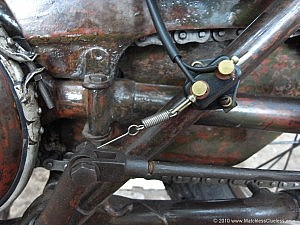 If you’ve been reading the previous posts of this blog you will hopefully have noticed that I am very keen to keep my Matchless as original as possible during it’s so-called ‘restoration’.  However, there are a few concessions that I have made to modern technology which I think are important to make the bike usable on a daily basis.

That said, I have tried to keep these as discrete and hidden as possible (within the confines of what is technical possible and available here in Hyderabad) so as not to spoil the overall effect of the motorbike.

The first of these adaptations has been to fit a rear brake light; I don’t mind hand signals for turning, but waving your arm up and down to let traffic behind know you’re braking has always just seemed plain crazy.  How you do this whilst braking has also remained a mystery to me.

And so, the mechanic has fitted a nifty little switch on to the back brake pedal for me, as is shown in the photo above.  It does the trick quite nicely without being too obtrusive, but how long those exposed terminals will survive is anyone guess.  Perhaps I’ll buy a handful of spares just in case.  The extra wires were included as part of the complete rewiring of the motorbike, so no problems there.  So the final step was to change the original single filament lamp and holder to a dual filament stop / tail lamp arrangement.  Job done! 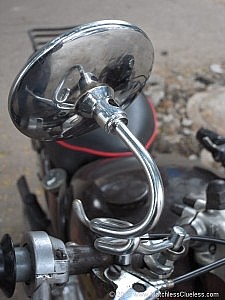 The next step was to fit some mirrors.  Again, in the congested traffic of Hyderabad with vehicles coming at you from every direction, I thought these were kind of essential. Finding some suitable mirrors was however quite a mission as the bike obviously has no existing  fixing points for such accessories.  A clamp on type of mirror was therefore needed. The first motorcycle accessory shop I looked in had one type of clamp-on mirror but I wasn’t so keen on the design, so decided to look on.  However none of the other shops I went to had any other types at all, then when I went back to the first shop, they had sold the only pair they had in stock.  And that was that, no more clamp on mirrors in all of Hyderabad.

So what to do?  Well we continues to search in vain, until someone suggested trying one of the auto-rickshaw (tuk-tuk) part shops. People seem to remove the mirrors from most vehicles in India as they’re normally seen as a bit of a nuisance – poking out sidewards as they do and generally getting in the way when you need to squeeze between other vehicles. But the auto’s seem to keep them in place, and indeed often need to replace them, and hence various different types are available.  I found some chrome effect ones with rather ‘interesting’ curly stems which looked like they would do the job when combined with some bar clamps.  Now they’re not exactly what I was looking for, but beggars can’t be choosers and they were only 140 rupees (less than £2) for the pair.  So they would do for now, at least I could find something more in-keeping with the rest of the Matchless.

The last change to the electrics is to change the headlamp to a dipped / main beam dual filament type, although this was actually already done to the bike when I bought it.  I never really noticed it though, and being as the rewiring was already complete when I did, I decided to just leave it as is.  Not that it makes the slightest bit of difference to the light output or pattern though, what with the 18/18 watt bulb and cheap reproduction lens that the mechanic has fitted.  But still, I’m not planning to ride much after dark and these details can easily be rectified later down the line.  The main / dipped beam switch on the left handlebar is not the highest quality bit of kit (the first one fitted was faulty and melted in a puff of smoke when the battery was first fitted – see here) and it does rather get in the way of the other controls.  Still, it serves a purpose for the time being.

2 Responses to Concessions to modernity