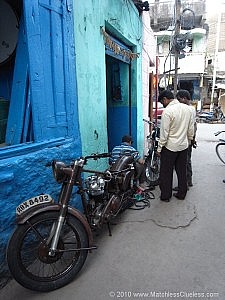 My G3Ls parked up at the auto-electricians.

So with the engine now running the wheels fitted, it was now time to take the bike to the local auto-electricians.  The old electrics were in a fairly bad state so I decided to have the bike completely rewired to (hopefully!) ensure reliability later on.

The dynamo and ignition systems had already been serviced whilst the engine was being rebuilt and these were now refitted to the bike.  Other than the lighting system, there’s not much else to the electrics on these bikes, oh apart from the most important of all vehicle parts here in India that is – the horn!

The Lucas 700 headlamp that was fitted had an ok glass, but the mirror behind was somewhat worn and faded.  So, being as though I’m not envisaging much light coming from the 6 volt system to start with, I thought a new headlamp was probably in order.  There are new reproduction ‘Minda’ units available here for only a couple of hundred rupees (about £4), so whilst these are by no means in keeping with the originality of the rest of the bike, I thought they’d make an adequate temporary substitute until a new Lucas unit could be tracked down.  The Lucas lighting switch was also sadly in rather bad shape electrically which was a shame as I quite liked the old battered look it had which fitted well with the rest of the bike.  Again a temporary ‘Minda’ unit will be fitted for now until I can find a more original replacement.  The ammeter had suffered water damage in the past and was rather corroded inside witha  firly stuck needle, but as this was already a cheap Minda unit  replacing it was a no-brainer. 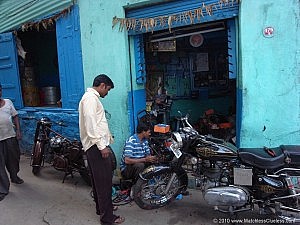 The last part of the rewiring job is going to be to fit a stop light switch to the back brake.  I’ve wanted to keep everything else on the G3Ls exactly as original, except on this one point.  I think a stop light is kind of essential as whilst I’m happy to use arms for indicating, I prefer to have my hands on the handlebars whilst braking.  And so my one concession to post-1951 modernity is going to be to fit a switch to the rear brake and change the original single filament rear bulb to a twin filament including a stop light.

All I have to do now is try to track down a 6 volt battery somewhere in the city, which I think might be quite a challenge.  The supplier the mechanic has used previously does not stock them any more, so it’s going to be a case of searching through all of the hundreds of little battery shops to hopefully track one down.  Fingers crossed anyway!

3 Responses to Ready for rewiring