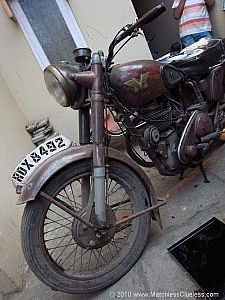 One of the things I liked about my G3Ls when I first saw it was the original paint job, or rather, what was left of the original paint job.  Being an ex-army bike, the colour it was supposed to be was khaki-green.  However, the last six decades had taken it’s toll on the finish and there was now as much red oxide primer and surface rusted bare metal visible as actual paint.  I’m not exactly quite sure why, but I quite like this look for the bike.  It’s completely honest and what you see is what you get, all 59 years of it’s history!

So, my thoughts were that the bike should stay looking exactly as it was with just a mechanical overhaul.  The mechanic and my driver would need a lot of convincing though.  Now the Hyderabad approach to restoration is firmly along the lines of making the bike look exactly as it did when it left the factory, plus a few ‘tasteful’ gold plated embellishments.  So it’s a complete strip-down, out with the gloss black paint, chrome plating all round and lots of polishing.  The lucky Matchless bikes generally get a splash of colour in the form of red jampot covers, but other than that, old bikes in Hyderabad tend to be black and shiny as a rule.  Now don’t get me wrong, these bikes look great and, contrary to what you might think, they actually do a pretty good job of restoration.  Labour is cheap, the old skills and crafts are firmly alive and kicking, plus there’s no health and safety regulations outlawing the traditional chemicals and processes (is that good or bad?).  But I didn’t want my bike to be another shiny black model like all the rest.  In fact, there another G3Ls in the workshop next door at the moment having some engine work done which has been restored in this exact way (the two bike’s engine numbers are very similar so I suspect they’re ‘brothers’ from the same consignment).  I’ll get some snaps next time I see it. 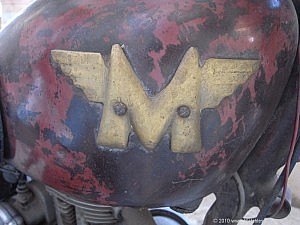 The petrol tank with it's flying 'M'

After much discussion, the mechanics finally came round to my way of thinking and it was agreed that the bike would be stripped down, cleaned and the painted but only with a clear lacquer so that the original bare metal / undercoat / army green paint effect would remain unchanged.  They were still rather confused as to why I would want to go to the trouble of stipping down and rebuilding the bike without changing the colour, but my explanation was that it would take an hour to paint the whole bike black, but that it had taken nearly 60 years to get it looking like this.  This seemed to do the trick and they are now well on board with the idea of ‘keeping it original’.

So that’s been the idea – more of a waterproofing to keep the rust away rather than a full restoration in the conventional sense, but I would hopefully be restoring it’s useability and roadworthiness (another stange concept in India!).  Obviously some things woudl need to be changed though.  The seat for instance was all torn and beyond repair so would need re-covering, plus new tyres, cables, etc were needed. 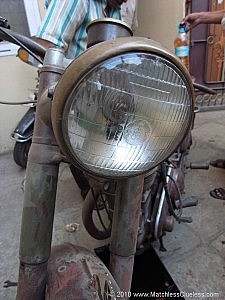 The headlamp of my G3Ls

I did however decide that the engine was in need of a bit of a clean and polish, as much to be able to check that it was already mechanically sound as for looks.  The engine and gearbox would therefore be sent away for buffing, and the exhaust would be rechromed.  But that was as far as I wanted to go, otherwise I think it would spoil the charm of the bike.

So anyway, that’s my plan for this bike.  Not to everyone tastes I’m sure, but if I change my mind later down the line and decide that shiny black is the way forward, at least I can still get it repainted safe in the knowledge that someone has already undone all those nuts and bolts which have been seized for the last few decades!  I’ll post some more photo’s of how it turns out at a later date so you can judge for yourself whether I made the right choice.