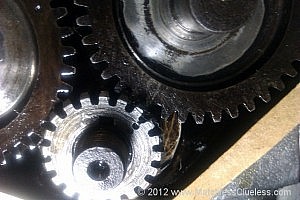 I didn’t think too much of this initially as I knew that there were various guides, both in the original Matchless owners manual and also in other books, that described the timing marks in detail and how these needed to be set. However, when I actually came to do the timing I found that the markings on my cams didn’t match those shown in any of the books or any pictures I could find anywhere online. So this wasn’t going to be simple after all!

There was a dot on the inlet cam as expected, but the only one I could find on the exhaust cam was on the inside where you couldn’t actually see it when the cam was inserted into the engine. This seemed odd. Also, the timing dot on the small pinion drive gear is usually next to one of the teeth so that it can align with the dots on the cams which are next to a trough between two teeth. 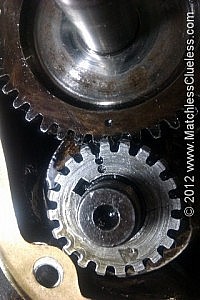 However the only marks on my pinion were two dots one above the other next to a trough between teeth, which meant that it was unclear exactly how the pinion and cams should align. You can align a tooth on the pinion with a trough on the cam, but to align two troughs is impossible. The timing mark on the pinion therefore sat to one side or the other of the mark on the inlet cam, both positions potentially being equally right or wrong depending upon which way you look at it.

The only thing to do was to try it, so I reassembled the timing cover and magneto drive chain and kick started the engine to see whether it would run.  Of course I turned it over slowly by hand with the plug out a good few times first to make sure that the valves didn’t clash with the piston or anything like that. But everything seemed to turn over fine so I put the plug back in and gave it a couple of good kicks.

To my surprise and relief the engine started and seemed to tick over ok, albeit with a good cloud of smoke bellowing from the exhaust (well it had been stood for well over a month since it last ran!). It didn’t seem to be running quite right though, although I wasn’t too sure whether this was because the timing was out, or just because it hadn’t run for so long or maybe the carb needed adjustment. 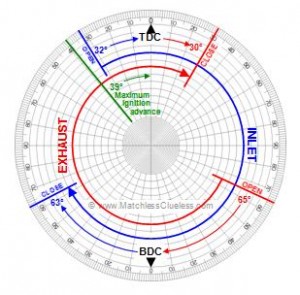 After much head scratching and discussion I decided that the only was I was actually going to know for sure whether the valve timing was set correctly was going to be to try and measure the valve opening and closing angles.

The first thing to do was to make up a timing disc with the correct valve opening and closing angles clearly marked on which could then be affixed to the other side of the engine drive shaft. I’ve uploaded the timing disc I made here so you can download and print it if you also need to time or check your G3’s engine.

Using the timing disc I found that the both the inlet and exhaust timings were actually quite far out, maybe by as much as around 40 to 50 degrees. I was really surprised that the engine would even run with the timing this far out, so it really shows how bullet-proof these old engines are in many ways. Not that I had any intention of running it with the timing so far out of course!

So if the timing marks on my cams and pinion gear were wrong I would need to set-up the timing manually by positioning the crank at the appropriate angle before or after TDC (top dead centre) and then inserting the cams so that their lobes were just starting to move against the push-rods.

So problem solved! The pinion wheel I have is obviously slightly odd, maybe from another engine type, and so I just needed to ignore the obvious timing dots on it and instead align the keyway slot with the dots on the cams. With the engine all back together I tried starting it again and it now seemed to run and tick-over much more smoothly, and also with much less smoke (although this could of course just be because it had run for a while now and cleared the backlog of oil in the sump etc). 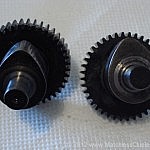 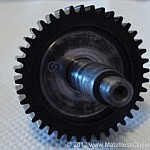 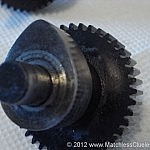 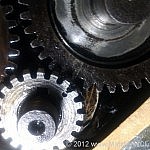 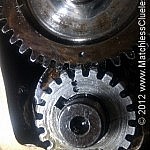 One Response to My unusual G3LS timing cams