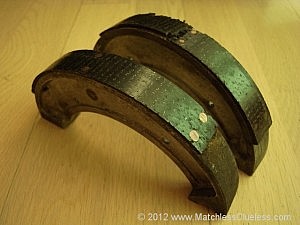 A rather worn pair of Matchless brake shoes

Back in India, the mechanic had told me that the front brake shoes on my Matchless G3Ls motorcycle were getting a bit low but would probably need replacing in a year or two’s time. However the parts weren’t available there and my attempts at getting spares sent across from the UK had fallen foul of a rather unreliable postal system.

So when I moved to Hong Kong, one of the first things I ordered from back in the UK was a new pair of brake shoes ready to fit once the old ones had worn out.

Strangely enough though, the stopping power at the front end of the bike had actually improved since we got to Hong Kong thanks to a bit of adjustment and a new cable. Needing to shorten the cable by over an inch to take up the play should have probably given me some clue as to how worn the brake shoes actually were, but as they were working better than ever I kind of assumed that the Indian-made cable I had installed was probably just too long.

But anyway, I asked my mechanic to check the front brakes whilst he has the front suspension forks apart to replace the leaking seals. It turns out that the brake shoes were VERY worn, as you can see in the photos! 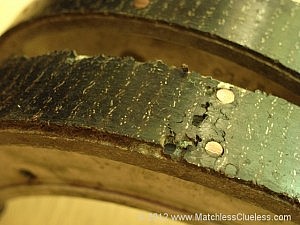 They were both down to less than a millimetre of friction material left with all of the copper rivets showing. Maybe that’s why the brake performance had seemed to improve recently? On the worst of the two shoes, the last of the friction material had actually started to crumble and fall apart as it was so thin.

So I was very glad that I had that pair of new brake shoes on standby ready to be fitted. Hopefully the front brake will now be even better once they have bedded themselves in.

Now I just need to check the rear brake shoes now to make sure they are ok; the mechanic in Hyderabad had said that they were fine, but after seeing the front ones I think it’s probably wise to check…

One Response to Replacing the front brake shoes