A new battery – made to order! 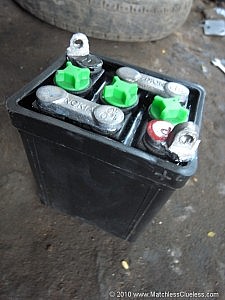 So with the rewiring now complete, it was time to get a new 6 volt battery for the bike.  The only problem was that the shop that the mechanic had bought such batteries from in the past had now stopped stocking 6 volt models.  A search of lots of battery shops across the revealed the same story in each case.  Apparently there is just not enough demand for 6v units any more to make it worthwhile anyone stocking them.

What to do?  One option was to convert the bike to 12 volt, but this seemed like a bit of a cheat and would lose some of the originality.  The chances of getting a battery shipped over from the UK were fairly slim and this would take rather a long time anyway.

But this being India, there was actually a much simpler solution – providing you know the right person to talk to of course!  I would just get one made to order.  Now I was fairly sceptical when this was first suggested and had visions of a Tupperware container of acid with some lead plates poked in the top – school GCSE science project style.  But with the lack of any real alternatives, I thought I’d give it a go.

My driver placed the order on Monday evening, and by Tuesday night it was ready for the princely sum of 550 rupees (just under £8).  Bargain!  I put a multimeter across the terminals and reassuringly it showed a reading of 6.08 volts.  That would do, providing of course that it would fit into the battery compartment on the bike.  Also, don’t ask my why it says Nokia on the top of the battery terminals as I really have no idea and didn’t like to ask! 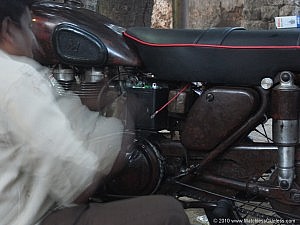 We took it down to the mechanics today and it was installed into the bike. Now I wouldn’t want you to get the impression from the photo on the left that the mechanic works super-fast.  Quite the opposite in fact; the motion blur is only as a result of it being early evening by the time the photo was taken and hence getting dark.

It took a while to get the battery terminals fitted to the bare wires, but eventually it was all connected up and the horn, headlamp and tail-light all burst into life.  The headlamp main / dip beam switch then burst into flames, or at least started to smoke quite a lot.  Just a faulty switch though which could be easily replaced.  Everything else seemed fine, although I still don’t know whether the charging system works or not.  But anyway, another step closer to completion.

Well, the battery lasted for a grand total of about 3 months in the end before I found that it wasn’t accepting charge (from either the dynamo or a mains charger) .  I guess you get what you pay for! The shop reckon that it just needs the acid changing, but I’m not so convinced.

But anyway, after having swapped across to using a modern solid state regulator (see here) a month or so back, it was now a simple matter to switch across to using 12 volt electrics instead (see my ‘how to’ guide here).  Therefore it was much easier to buy an off-the-shelf 12v Exide battery, swap the bulbs and use the higher voltage setup instead, rather than going through the hassle of finding another 6 volt battery somewhere.  Lets see how long the new battery last for….

2 Responses to A new battery – made to order!