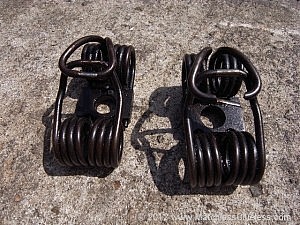 The valve springs to be replaced

After moving from India to here in Hong Kong, I took my Matchless G3Ls to one of the local garages specialising in classic bikes for a good check over. I was reasonably sure that my mechanic back in Hyderabad knew what he was doing, but just wanted to be extra sure that everything was as it should be before heading out on the local roads.

Also, many spare parts weren’t available in India so I was aware that some worn bits could well have been ‘bodged’ or swapped with similar Royal Enfield bits to keep the bike running.

Thankfully the Hong Kong mechanic gave the bike an overall thumbs up and thought that it went pretty well (or at least better than he expected given the photos I’d shown him previously!). One comment he had though was that the valves and guides were probably a bit worn, hence why the engine was burning a bit of oil and would sometimes be a bit difficult to start.

A quick email to Steve at AMC Classic Spares soon had a new pair of inlet and exhaust valves and valve guides on their way across the water to me. I dropped the bike off at the mechanics before going away on holiday for a couple of weeks and looked forward to it running better than ever when I got back.

When I did get back and spoke to the mechanic, it turned out that the engine had a small surprise in order for us. The valves and guides were indeed a little worn as he had suspected, but the valve springs were VERY worn! So worn in fact that one had actually snapped in half whilst the engine was being disassembled! 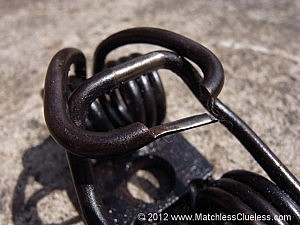 A rather worn valve spring!

You can see in the photos just how worn it was where it presses on to the end of the valve. The metal was just about worn through and I think would have surely given up the ghost after a few more miles riding.

So the servicing came just at the right time and saved me from a possible breakdown somewhere out in Hong Kong. Worst still, it could have made a right mess of the top end of the engine!

So another email back to Steve for another parts order. He managed to find me a pair of good second-hand valve springs (the type that fit my 1951 G3Ls are a little more difficult to find than those fitted to later models) and they’re currently in the post system some where. Hopefully they’ll arrive and day now and the engine can then be put back together and the bike back on the road!