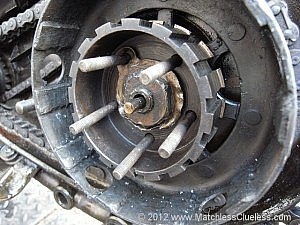 My worn B52 clutch basket before reconditioning

With my bike off the road and largely in pieces whilst the dynamo and magneto were away for reconditioning, it also seemed like a good opportunity to sort out my rather worn clutch basket that I mentioned in a previous post.

The ‘B52’ type clutch basket fitted to my 1951 ‘CP’ gearbox was quite heavily worn with the tabs for the friction plates rather rounded off. I had been able to source some new friction plates easily enough, but finding a new (or even good used) B52 clutch basket was proving rather more difficult.

It had been suggested to me that my existing basket could however be reconditioned by removing the old tabs and welding in some new ones.  And so I took the worn basket and the new clutch friction plates (to use as a template for the size and position of the new tabs) so a local welder here in Hong Kong to see what he thought. It didn’t seem like too difficult a job and a couple of days later I got a call to say that the work was all finished and ready to be collected.

The clutch basket after reconditioning

I think the welder had made an excellent job of fitting the new tabs as you can hopefully see in the attached photos. Rather than simply cutting out the old tabs by grinding off their welds as had been suggested to me, he instead put the basket on the lathe and turned them out.

This made a much neater job and also allowed the basket to be trued-up so that it would spin nice and straight. One less source of vibration to worry about!

The new tabs were simply made from appropriate lengths of steel strip of the right width to fit snuggly between the tabs of the friction plates. Using the new friction plates as a template was essential as on later comparison, the tabs of the old plates were also very worn. The new tabs were welded in place at either end, rather than along their sides as the old ones had been. This gave a much squarer edge where the friction plates needed to engage, so the fit is as good (if not better!) than new. It would also mean that the tabs could be renewed more easily in the future if required, although I suspect that the clutch now has another 60+ years of life in it! 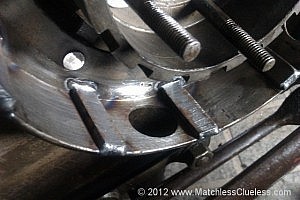 A close-up of the new clutch basket tabs

I’ve subsequently found that Andrew Engineering make and supply the ‘chainwheel and clutchcase assemblies’ for the B52 clutches for just over £150. Their part number is 018339 which includes the ‘G.34.2’ drive gear and ‘G36.3’ clutch basket which are riveted together. However, it cost me just over £100 to get my old parts reconditioned here in Hong Kong, plus I didn’t need to pay postage from the UK, so I am more than happy with the result. It also keeps one more original bit still on the bike.

With the bike all back together now after the dynamo and magneto also came back from being serviced, I can report that the clutch is working a treat. All the jangling noise when you pulled in the lever has gone and the action seems much more positive now. I also took the opportunity to replace the primary drive chain whilst the clutch was apart so hopefully that’s another bit of the bike which won’t need any further attention for a good while yet. Now if I can only get the primary chaincase to seal everything will be just perfect down there! 🙂

This website uses cookies to improve your experience while you navigate through the website. Out of these, the cookies that are categorized as necessary are stored on your browser as they are essential for the working of basic functionalities of the website. We also use third-party cookies that help us analyze and understand how you use this website. These cookies will be stored in your browser only with your consent. You also have the option to opt-out of these cookies. But opting out of some of these cookies may affect your browsing experience.
Necessary Always Enabled

Any cookies that may not be particularly necessary for the website to function and is used specifically to collect user personal data via analytics, ads, other embedded contents are termed as non-necessary cookies. It is mandatory to procure user consent prior to running these cookies on your website.